Here it is then, the thread everyone has been waiting for

For all those people with a leaking/non functional heater tap on their EA81 who want a modern/new part to replace it. There is a way!

Grab a heater tap from a V6, VN VT etc commodore such as this which is the correct bypass type required for our old Subies. Down side is it's made of plastic BUT they are cheap and plentiful being from a commo so easy to source a new one when it breaks. Maybe even keep one in your spares bag when you go on trips

It comes with a vacuum can attached to control it, it is a simple task to remove this.

The bracket which holds the original heat tap can be re-used, it is necessary to destroy the old heater tap to remove it from the bracket. It's quite easy to cut away with a chisel the little brass folded over mounting ears.

Happily the inlet/outlet arrangement of the commodore heater tap is correct for this application, and the lever which operates the flap inside works the same as the old heater tap. The cable pulls in towards the firewall for hot, pushes away from the firewall for cold. The tricky bit is you have to mount the tap at an angle to get the crank rotation to be in line with the cable travel, a bit tricky to explain but if you do this mod you will see what I mean.

I added a piece on the old bracket to mount the new tap using the holes that used to mount the vacuum can. Forgive my rough and ready looking example as below, I was in a bit of a hurry today and seriously couldn't be bothered breaking out the welder to fab up a fancy bracket. This is only going on my beater ute anyway

It is plenty strong enough, trust me. 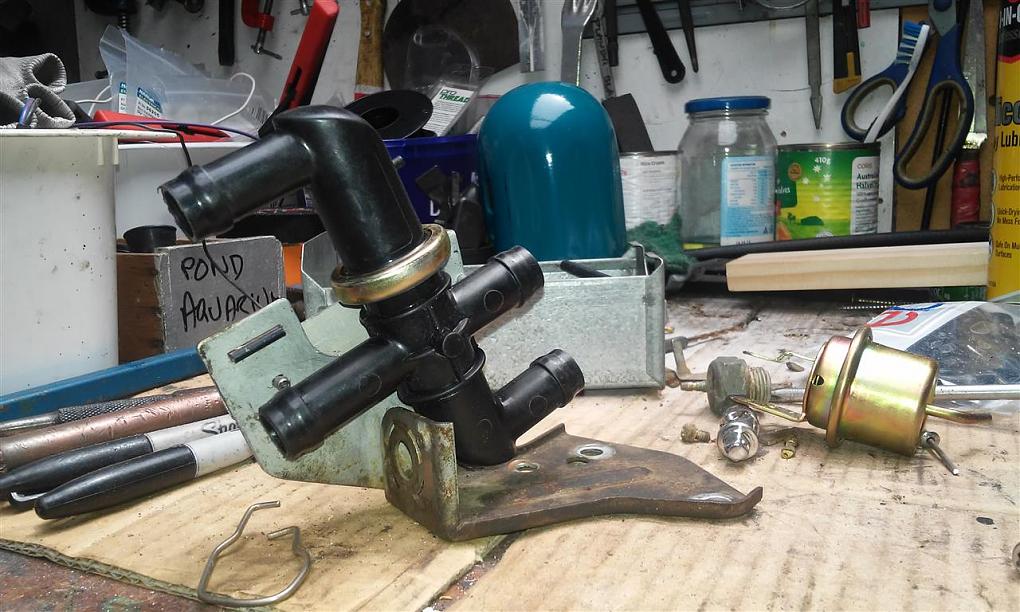 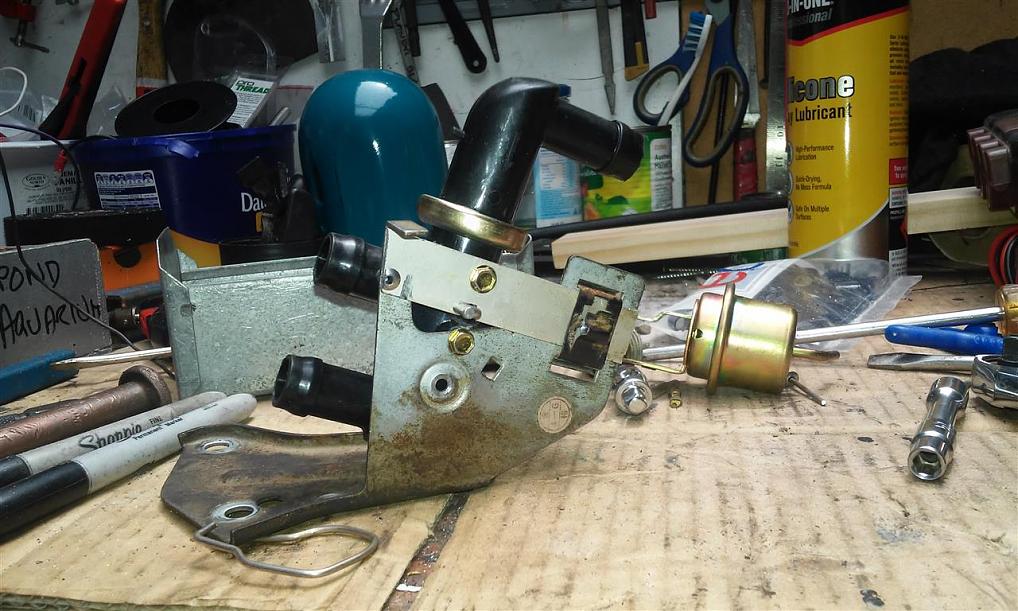 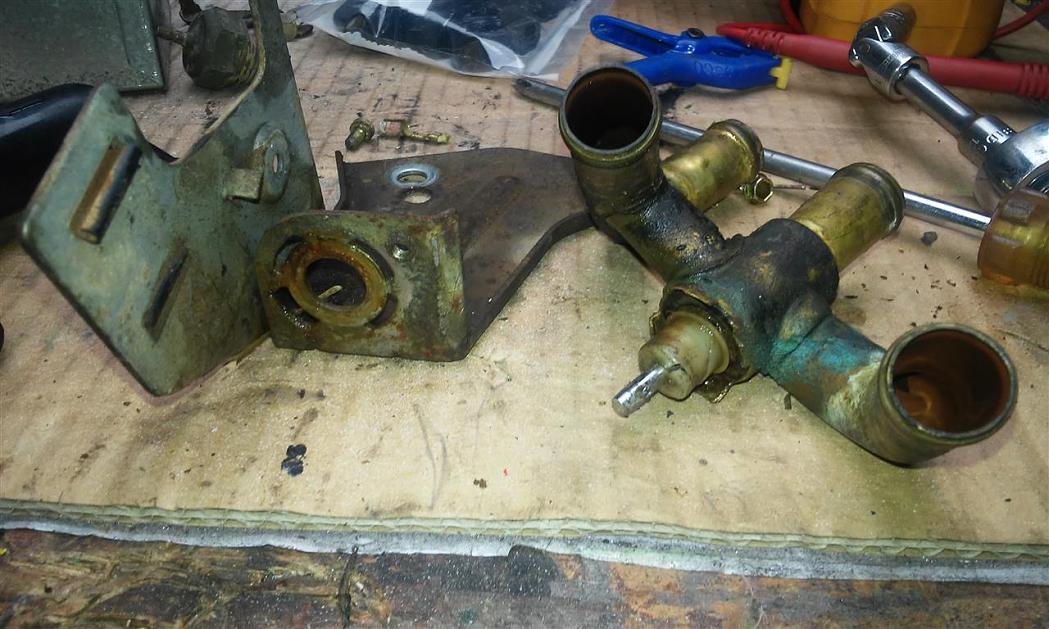 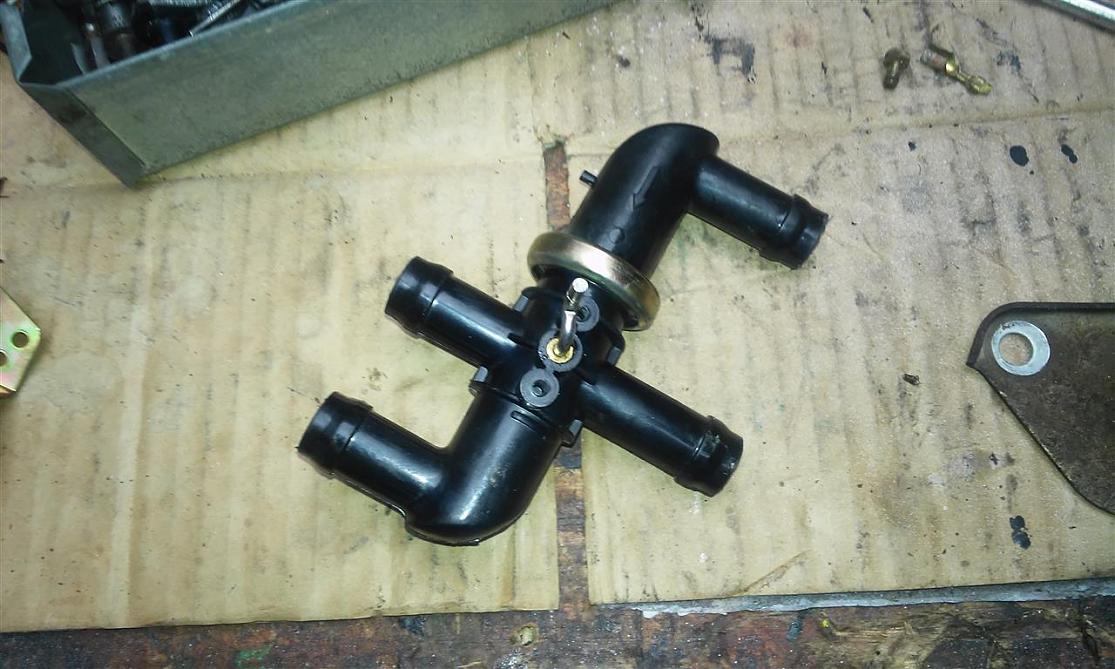 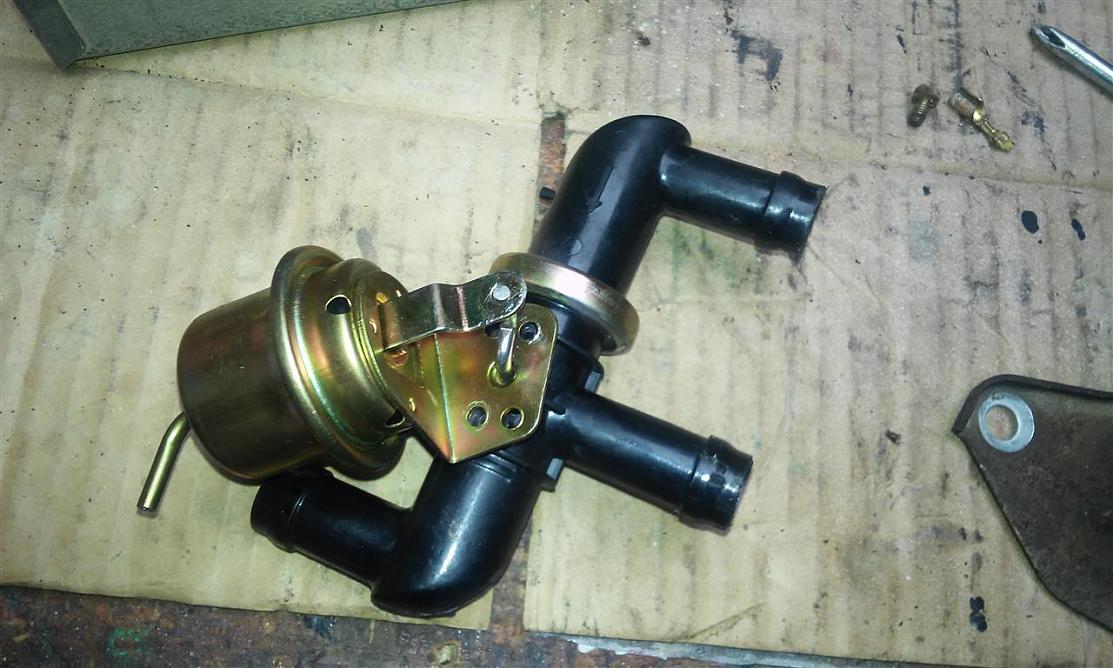 Next is mounting it in the car! It fits in there fine as it is, one annoying thing though is that the new tap barbs are straight and not bent 90 degrees like the old ones. Which means it is a stretch to get the heater hoses to come up to them. If I had more time I would have liked to mount the bracket on the chassis rail rotated a bit more to get the barbs pointing more at the engine, as it is I couldn't use one of the hoses from engine to tap, had to use some straight/per meter heater hose I had in the shed. One or two of the hoses ended up looking like they might kink round the tight bend. I got them on there as good as I could get them, it still seemed to flow alright.

One other annoying thing if you use the original holes for mounting the bracket to the car; the upper hose on the tap from the engine now rubs against the motor for the pisser bottle

Time will tell if the engine heat leads to the demise of this little motor.

Make sure you do your hose clamps up nice and tight, fill er' up with new coolant and check for leaks. I had one where I used new hose since it was a couple of mm larger ID than I would have liked. had to crank the hose clamp right down on that plastic hose barb...was waiting for the *crack* of broken plastic but it never came

Next hook up the cable pull to the crank of the heater tap - put the inside dial all the way to hot to make the cable as short as possible in the engine bay, hook it on the Z bend of the crank (make sure the circlip is on the crank to stop the the cable slipping down) and clip the plastic outer back into the spring clip thingy on the tap bracket. I would recommend putting a Z bend in the cable/push rod as well, as mine is now the cable comes out at a bit of a funny angle. Also the loop in the end of the push rod is pretty loose on the tap crank, there is room for improvement here with a bushing of some sort but I ran out of time; 10 minutes after I finished checking the leaks the rellies arrived for a late Christmas get together

I've got a long(ish...longer than usual) trip tomorrow up to Monarto so an hour on the freeway at 100 km/h and back should reveal any faults quick smart

Hopefully nothing blows a hose and puts my coolant all over the road, stay tuned

For anyone interested a diagram of the flow of this tap is below. It probably doesn't line up with the printed arrows on the tap itself, whether this is a problem or not remains to be seen. So when the tap is on (heater on) water flows from the intake manifold pipe (from the thermostat housing area) through the path in red, through the heater core and out through the path in blue to the pipe that goes under the intake manifold to the water pump, to be re-distributed to the engine.

When the tap is off (heater off) water just flows in and straight out again, from and to the aforementioned locations. Pretty simple really. 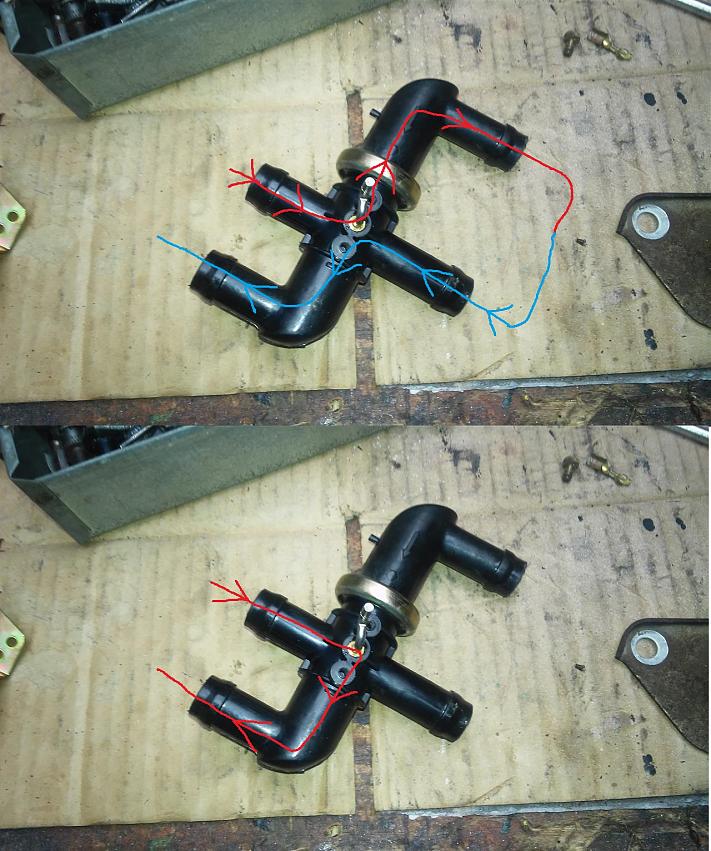 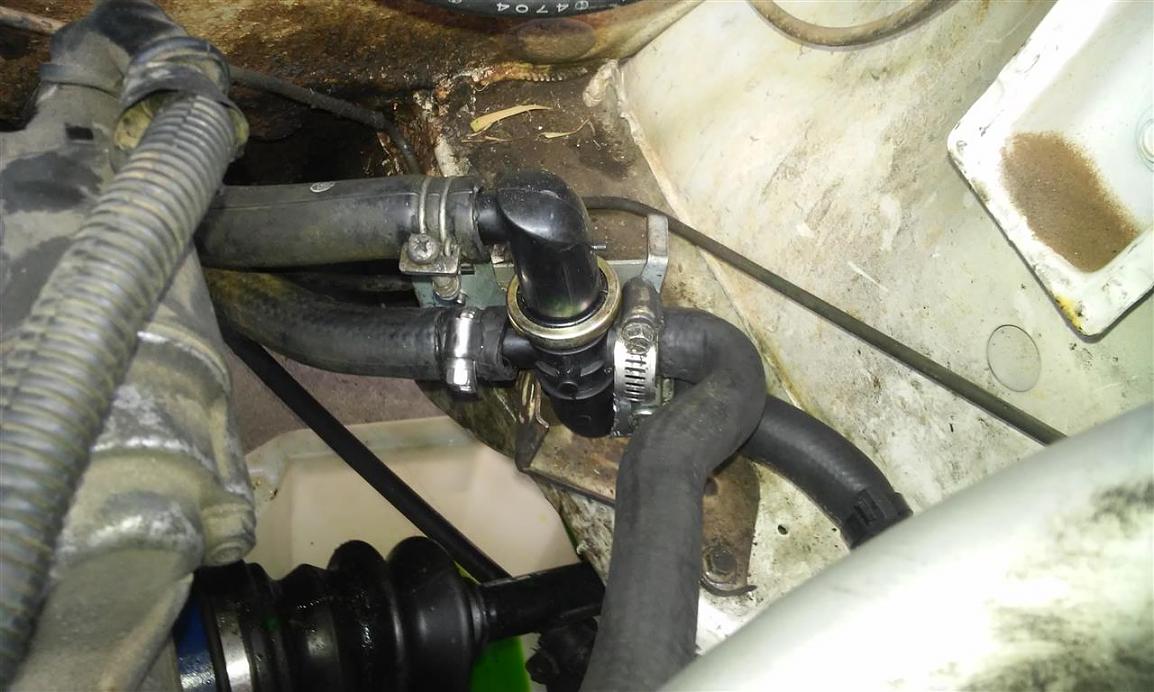 Road tested today, all up a couple of hours at 110 km/h and the tap works beautifully without a drop of leakage. Cold air on cold, hot air with a turn of the dial

The old tap seemed to be always on. Now I will do this same mod again on my wagon, but optimize it a bit for hose fitment etc.

Bad news is, got home today and 5 minutes later there was a green puddle on the driveway

I did have the rad out for inspection recently, it looked awfully ragged so maybe that is what has busted. Really annoying!

I grabbed a plastic heater tap ready to do this conversion, thinking mine was stuffed.

Turns out, nothing wrong with my tap. These things are built solid. I expect these taps will outlast almost everything else on the vehicle looking at the quality of materials and workmanship. I cleaned it, greased the mechanism and worked it until it opened and closed smooth as. Grabbed the hose and tested to make sure water flowed as expected as the mechanism moved.

My issue was likely the heater core being slightly blocked. Flushed it out until water ran clear. So hopefully my heater works better now, but if not, it isn't the tap at fault.

The moral of the story is that these taps are pretty solid so before attempting a conversion to a crappy modern plastic tap, check if yours is serviceable first as you could save yourself time and money