Well it’s almost August 2019, and I’ve got Basil in for HGs due to the pesky coolant and oil leaking externally. Head were shaved this time for piece of mind.

I ended up getting new head bolts - at about $4 a piece it made sense to go this way. I also found out there’s two different types of head bolts - the middle two are different to the outer two and are marked by paint on the head of the bolt. Last time I shoved them in any which way!

Anyway, I’m trying to find info on gearboxes. The replacement has a different code - only in the rear letters (when excluding the first two digits before the hyphen.

What I want to know is whether the diff ratios are the same. I know they both came from the RX but I want to make sure I don’t have to chase a rear diff for this gearbox. I just want to throw it in and drive (once the engine is back in) without the centre diff exploding.

That’s about it for now, just trying to find that info!

I’ve finally got the engine back together and in two weeks ago now (I think). Everything was good with the engine. HGs done, cam belt replaced including all pulleys and tensioner, waterpump stayed, all new oil seals.

Cam retainer plate removed for valve stem seals to be replaced. Valves were lapped while this was done - missed opportunity otherwise. I reckon many ppl fail to reseal the cam retainer plate when the HGs are done, this allows them to weep oil again in a short amount of time.

Sump was resealed with fresh silicone. New rear main seal and the two plates on the back of the engine were resealed too. So oil loss should be nil from leaks now!

The issue now is with the replacement gearbox. I’ve got a wobble on the front left that Toonga thinks could be a drive shaft - issue wasn’t there before but I’ll swap shafts left to right while the box is out.

I’ve split both gearboxes beyond just the centre diff. I have new bearings for the front diff to help eliminate that wobble - if it was bearing related, doubtful but new bearings in there will be nice anyway.

The old box slipped out of gear in 3rd and 4th around town when cruising on light throttle. Turned out there was a bearing collapsing that allowed too much lateral movement in the top shaft. So that box would’ve detonated at some point due to this bearing.

New box in the initial test drives is tight. So new diff bearings and the good centre diff will have us a sweet box that will hopefully see Basil out to the end of his days.

As for gearbox codes: info from Subyclub.com said the different bits in the later part of the code “A” and “C” referred to the revision of the vehicle - basically the cosmetic looks of the vehicle. The other ones I think refer to the centre diff in the gearbox. Cases are very similar but there are different bearings used for the rear drive from the centre diff.

Our original (good) centre diff uses ball and cage bearings. The replacement gearbox uses tapered roller bearings. There are slight housing changes to accommodate this but the centre diff looks like it’s interchangable between the two housings.

Once the box is back together it’ll go back in Basil. Then we’ll sort out a new rear muffler (there’s a genome STi muffler on gumtree that’s very tempting - but it’s more than what I want to spend) before he’s delivered back to my sister. It’s been a long time coming!

It sounds like you sort of know what you’re doing 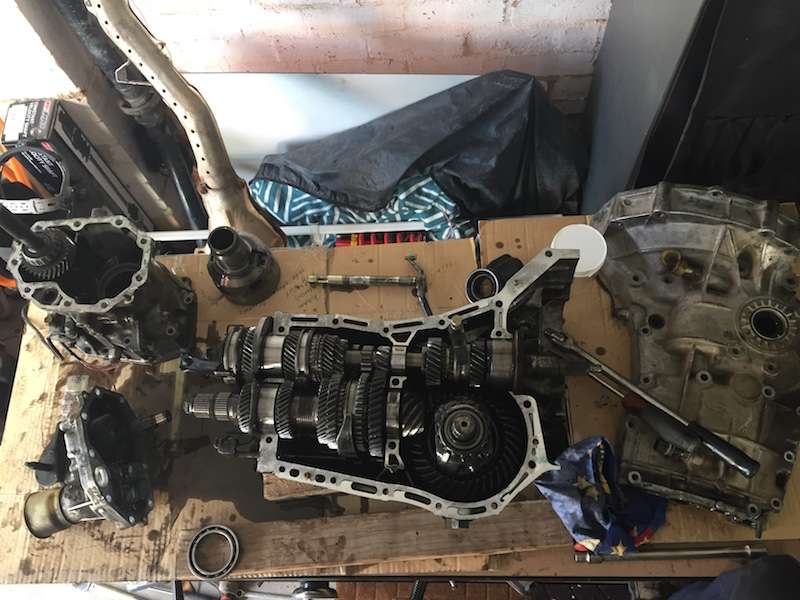 ^ the replacement gearbox. The old one is on the floor behind me in the pic, in the same amount of pieces!

Some of the work done on Basil's engine while I had it out: 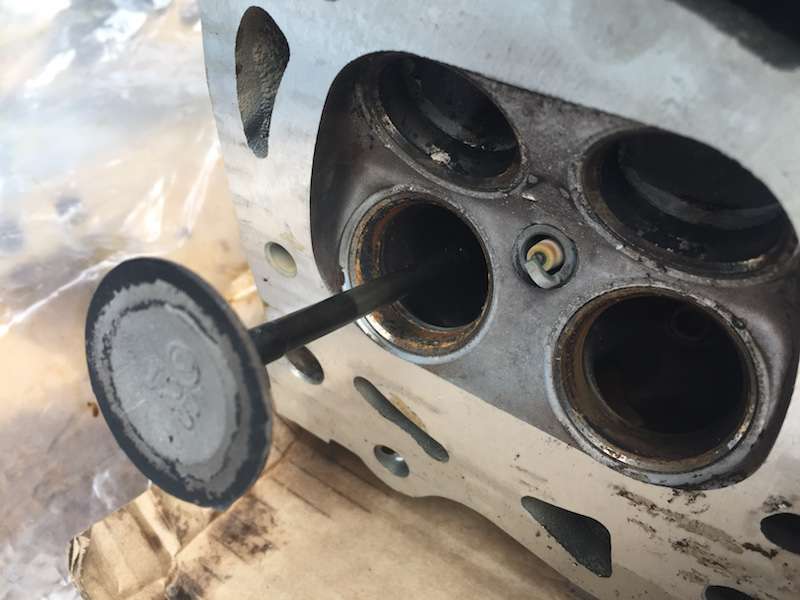 ^ Valve lapping. Not much fun, but with a cheat's way with a DC electric drill and a piece of vacuum hose it was much easier! 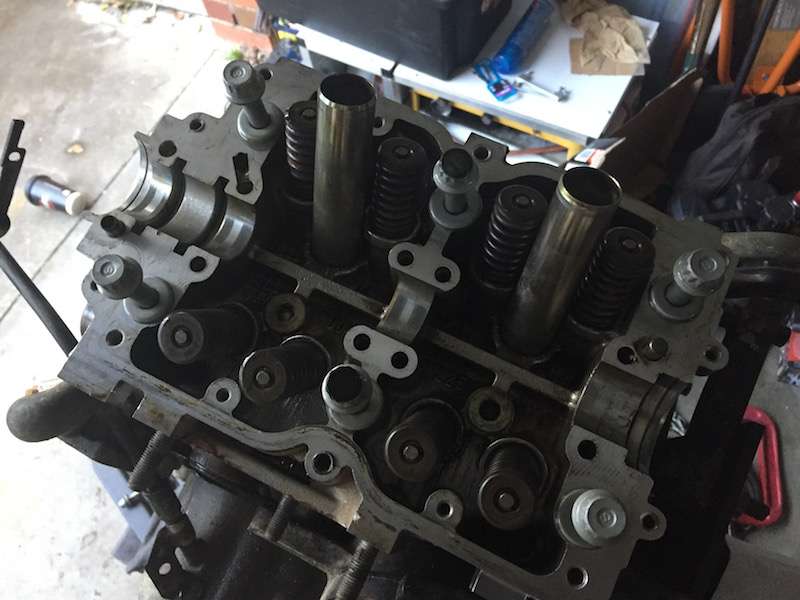 ^ "Look Dad, I got the head bolts in the right order this time!" - seriously though, I didn't realise there were two different head bolt types on the EJ251s. I only noticed the painted ones when I was removing them - and they weren't where they were meant to be - in the centre two holes! Got it sorted this time.

Diff bearings are now removed. I'll put the new ones on tomorrow night (all going well), then begin prepping, aka cleaning, the gearbox cases for resealing. I'll also have to mess around with the diff bearing retainers due to the new bearings going in, things may have changed a tiny bit. New seals will go in too - these were meant for a gearbox I've got planned for Redback.

All going well I'll have Basil running again Sunday at the latest. Then to fix a few little, annoying issues, get a new rear muffler and send him off to his rightful owner (finally!).

Today was a big day that started off early, before 7am starts in the shed are very rare events but it happened today.

After a wasted afternoon yesterday I didn’t have the gearbox sealed as I’d planned - I got sidelined from my plans is probably the best way to put it. Anyway... 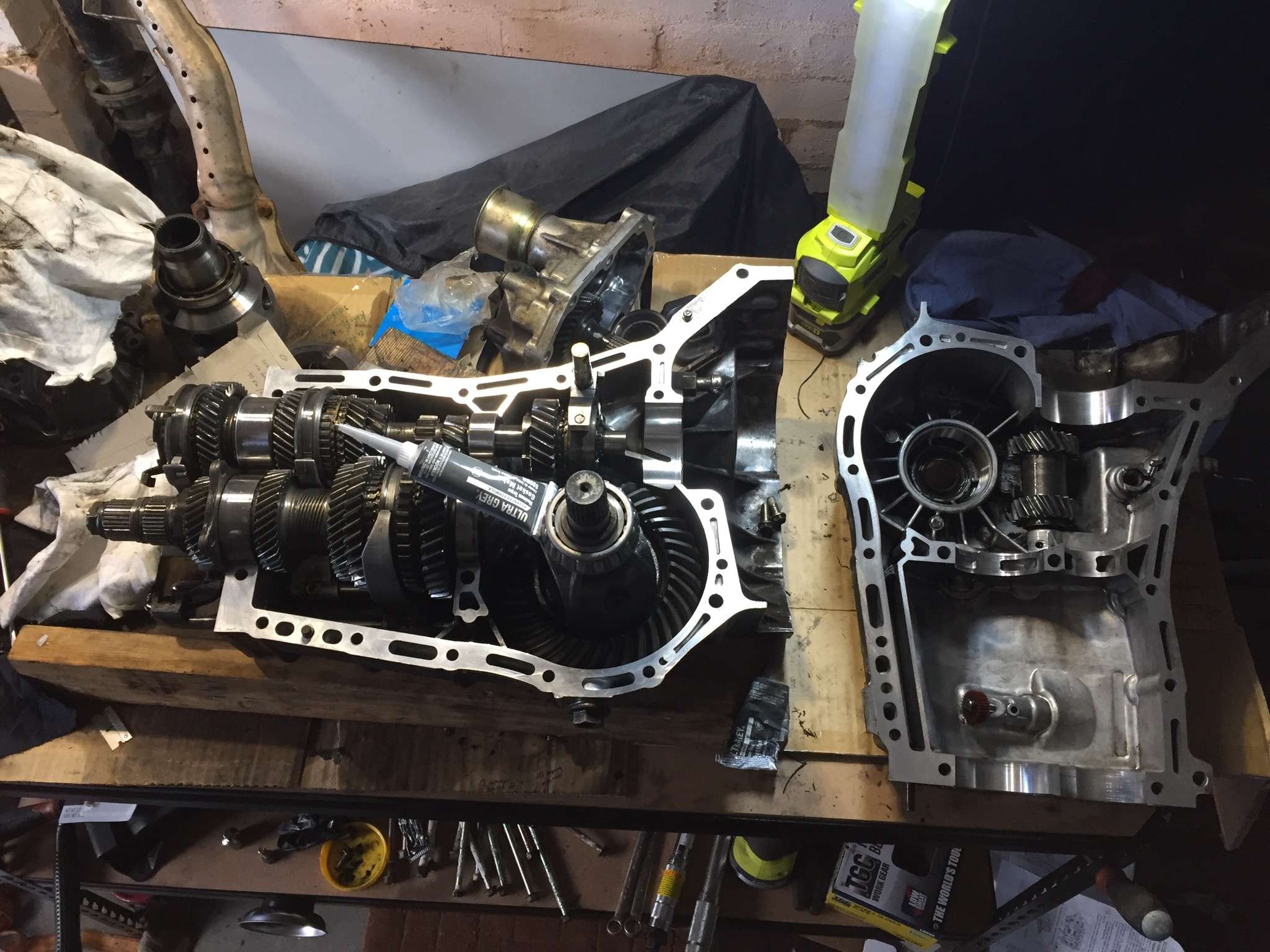 Up early this morning, prepped all surfaces for sealing. Sealed the front cases, sorted out the transfer case and rear bearing plate assembly too. Bolted it all together, only to find that when I went to sort out the diff preload/backlash (I cant remember which is which), I couldn’t for the life of me rosette the input shaft unless I used some vice grips, even then it was super difficult. Round one before the centre diff assembly went on (and the point you should mess around with the diff settings if you’ve changed anything such as front diff bearings): 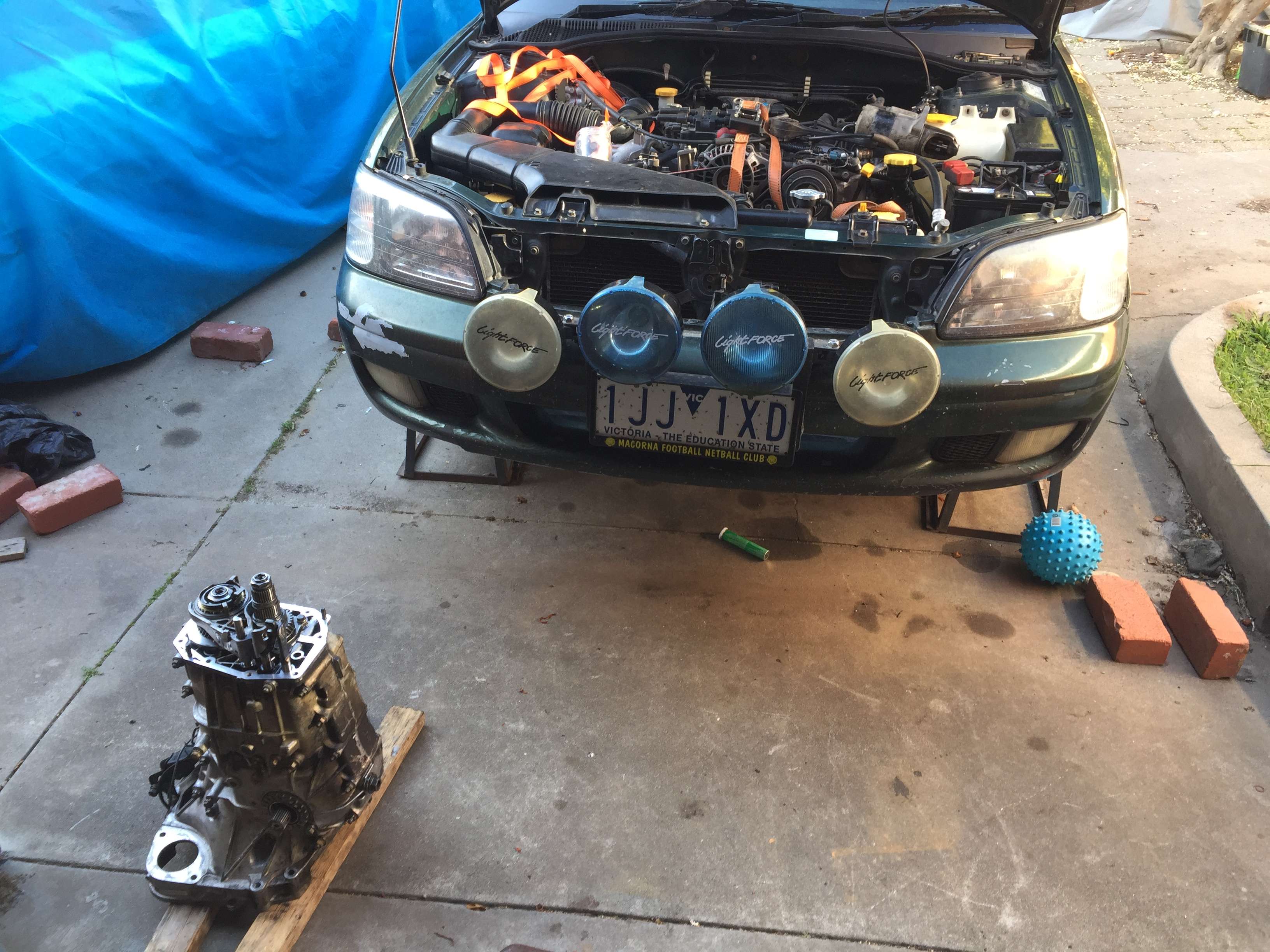 Box stripped down again. At least the centre diff section didn’t need full disassembly. I thought it was the upper shaft front bearing not seating on the dowel pin properly. Turned out it was a jammed synchro on the input shaft, the one that deals with the low range. I put it in with the input shaft. It has three slots for the retainer tabs in the low range selector hub to live in and stop the synchro ring from rotating freely.

With that sorted and the sealing surfaces cleaned and prepped again, the gearbox came together without issue. While still on the bench, engine side down, I sorted the diff settings (I had previously replaced the seals and put the O rings in once I was done messing around). Centre diff housing assembly went on and the box was sorted for install. Round two - done and ready for install: 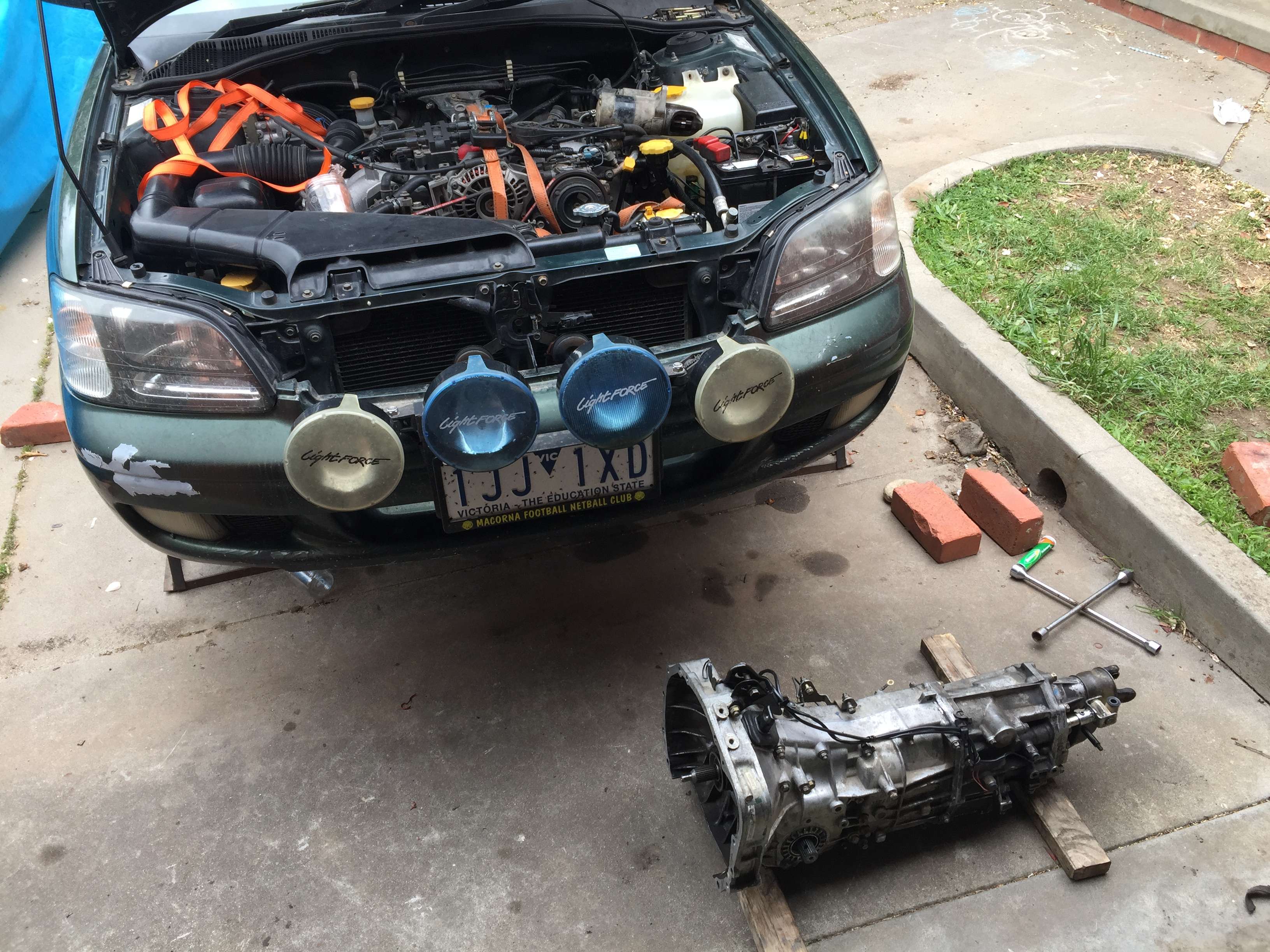 Dad came up and before the box went in we looked at the front left driveshaft. Outer joint was dry, we opened it up, cleaned out as much of the dried out grease as possible and packed in some fresh moly grease. It felt much better rotating the joint after this, nice and smooth! Hopefully that effort will pay off with the wobble disappearing.

Once the CV shaft was sorted we got the gearbox slotted in easily from under the subi; subi on ramps, gearbox on wooden blocks strapped down on a motorcycle jack. Best way to do it! 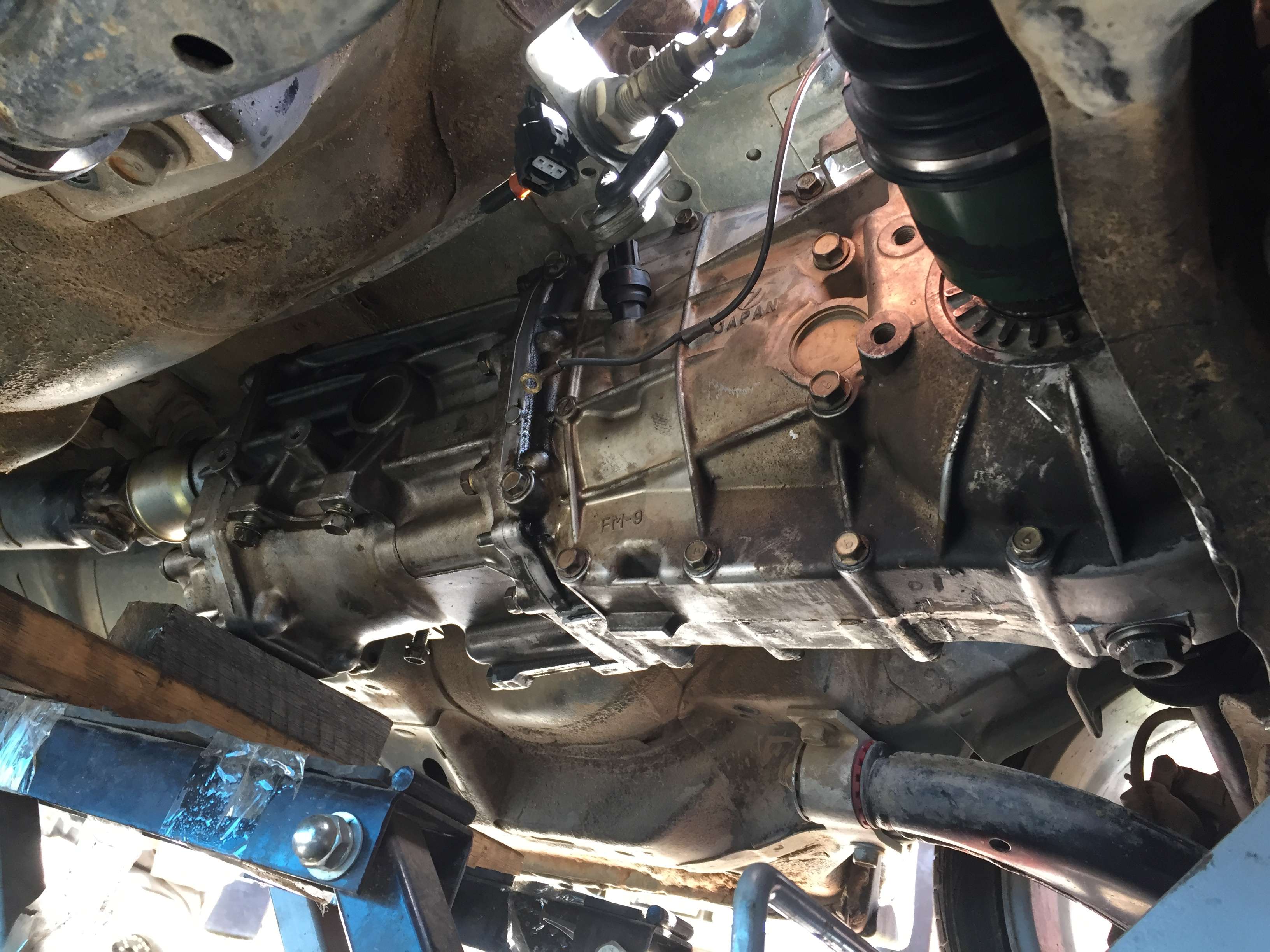 The drive shafts slip on as the gearbox approaches the engine while being raised up. I think this is the fourth or fifth time I’ve done a gearbox this way now. No need to jack up the front end and pop ball joints out.

After the gearbox was in, all the other bits came together relatively quickly. After all that was done and before the exhaust went on, we replaced the steering rack boots. The repco units weren’t a great fit and the cable ties supplied were rubbish. A set of quality cable ties now hold the boots on the rack snugly.

Some brake maintenance up front was done too - replacement caliper brackets with freshly greased caliper slide pins were installed. These were sourced with factory caliper retainer bolts. Someone used non OEM or automotive spec bolts to hold the caliper on. They were a 13mm bolt head as opposed to 14mm. I didn’t like that plus the slide pins weren’t great, so I finally got that sorted.

Now I’ll be eagerly waiting for work to finish so I can get home and fill the gearbox and rear diff with oil (the silicone used on the gearbox needs this time to cure before meeting oil), replace the airbox and go for a drive!! Hopefully there won’t be any wobbles, vibrations or noises other than that of the sweet sweet subi burble this thing has, even with the clapped out rear muffler - that’ll be sorted this week all going well.

PS - my new Ryobi 18v kit has a “wizzer” tool in it for tightening/loosening bolts an nuts. This tool copped a flogging with this gearbox build and install. It makes things so much quicker and less physical

"The lounge room is not a workshop..."

Gearbox and rear diff copped some oil this afternoon, then a test drive. He went well and there’s no gearbox noises or odd behaviour when doing U turns.

More driving made it worse over time and when cruising at different speeds you could feel it throughout the car sometimes, worse others and there were speeds where you couldn’t really feel it.

The thing that sold me on it being a wheel bearing was when doing a gentle swerve with clutch in you can hear a whining/whirring sound when the car has its weight on the left and it’s quiet when the weight is on the right. It’s a very subtle sound when travelling in a straight line.

I’ve also got a code 22 - knock sensor. It comes and goes so I’ll have to investigate the connectors in the system and see if that resolves anything. It’s still running well anyway!

Now to sort out this wheel bearing issue... then tidy up the exhaust and go from there.

How does the engine mounts look? Have they had any oil on them or come out of them?
Top

Long story short - proper update to come - it was a self inflicted driveshaft issue!

Basil is running very well, sounds awesome and is now back to scaring birds and roos up on the Murray;)

Basil's rims are now changed over to a set of stock 17 inch factory subaru rims. I think they're Gen4 liberty rims, but I'm not 100% sure - they came from a Gen1 that 1WD-Foz was wrecking.

Reason for the swap was that the ones in previous pics have cracked - big time! My sister sent me a video of a crack about 8cm long, parallel to the rim's edge and about 1 to 1.5cm inwards. I don't know how that tyre wasn't leaking! So now the tyres are swapped over and Basil looks more stock than ever

I'll grab some pics when I see him his weekend.