Just been looking at your wagon thread, that is a long term project all right

Don't give up hope, the light at the end of the tunnel is bright

This weekend I fixed another few issues and got to the bottom of my alternator/charging issue - traced it back to having LEDs in the instrument cluster warning lights (causing low voltage out to the alternator lamp terminal) and also having the Lamp and Sense wires the wrong way around at the alternator. Took me a while to figure those two things out but now the alt is all sweet and charging perfectly. The other thing I fixed was two brand new heater hoses from the engine bay into the cabin, that was a bit fiddly but it's done now and I finally have heat that turns on and off

Can probably drive it to work now and not worry about the windscreen fogging up.

So after that I've driven it some more, the trip counter is up to 140 kilometres now, was 0 before it hit the road for the first time a couple of weeks ago. Have to say, it drives flawlessly and is very comfortable, sounds good (both exhaust and stereo

) Just have to keep driving it now, oil and filter change at 200 ks, the tappets are still noisy so need to adjust them again. Oh and the proper wheels and tires are yet to come, local wheel shop is sloooooooooow. Might end up sending 4 rims to Queensland for mods, they might actually be quicker.
Top

Been a while since any updates on this car, there's been a few issues to address and I haven't had a weekend to myself in close to a month! Novel below...

Wheels/tyres - have been un-successful in finding any wheels with the right PCD and offset. The one D-hole steely I bought and sent to a local wheel place to see if it could be modified to the right offset drew a blank, I was counting on that to work but nope, back to square one. If I could go back in time and find the guy who thought it was a good idea to modify the disc brake rear hubs and front hubs to 4x114.3 I'd punch him in the back of the head

And also myself for thinking it was a good idea to buy them.
I may be onto a lead with some Performance brand mini-lites/ ultralights whatever they're called. They are P5 offset from factory but can be machined to P25 which is close enough to the P35 that I wanted in a 15x6" rim. They also come blank and can be drilled to any stud pattern which is a winner. Hopefully with the right tyre selection I will get away without needing to add flares to the front. My dream wheel was a 15x5" with P25 offset, that would have been perfect but they don't exist evidently. Second hand wheels would have been fine but you try finding 5 of the same wheel second hand, it's just not a thing that happens. If the alloys are a no-go as well I will need to get steel wheels custom made from scratch...which nobody in Australia does.

Oil leak - There appeared a pretty major oil leak not long after I started driving the car. From the exhaust stud on the passenger side which I had to do a major thread repair on. This was because the last drongo to repair it drilled right through into the crank case with a 14mm drill bit

With the exhaust stud not going right through into the crank case this left a little void that would fill with oil then leak down past the threads of the stud. I drowned everything in loctite when I did the thread repair hoping it would hold the oil...nope

So I decided to plug the void with "steel" epoxy putty from inside the crank case. Which I did today and had to remove the rocker arm/shaft assembly to remove a pushrod for access to the void. Hope this doesn't effect the head gasket seal. Also did the first oil and filter change today after 300 km's on the engine. Also adjusted the valve clearances again because they were hellishly noisy as well as replaced a U shaped fuel hose in the engine bay which kinked when the engine bay warmed up. While I was under there I noticed the front suspension geometry...it must have settled something major because the front wheels look stanced now

The negative camber is crazy /---\ going to need to address that with some different strut top blocks I think.

Only got to fire the engine up and let it warm up to operating temp before it got dark, we'll see tomorrow if there are still oil patches on the ground! Sadly the valves are still as noisy as before, not sure how to address this. I know my cam shaft was ground and lifters machined to remove wear marks, would this affect the specs required when adjusting the clearances?
Top

Lifter specs should still be the same as before all the machine work etc.

I find my lifters very touchy when I adjust them. Not a fun job that’s for sure!

The oil through the exhaust stud doesn’t sound like fun. I hope the epoxy does the trick for you.

That PCD thing seems like a PITA. Can’t have the hubs reworked back to factory PCD? I’m sure that’s not an easy or cheap task though.

Having a bit of a search for opinions on valve clearances I came across something from Paul (formerly Subareck Paul) he suggests if they're still noisy then adjust the exhaust valve to .012" instead of the factory .014". Think I'll give this a go next weekend. Whatever I did to my Brumby way back when was spot on because that thing runs silent...maybe I should pull it apart to measure what they were

There was no oil spots over night and nothing on the end of the stud after todays drive so fingers crossed the putty did the trick.

Re-working the hubs, I considered it (I work in a machine shop I could even do it myself, it would be easy) but the old holes have been welded up and machined back, you can't even tell where they used to be. I'm hesitant of drilling the weld metal back out or missing the mark slightly, in any case I'm worried about affecting the strength of the hub. Hopefully the Performance superlites work out, I should hear back on Monday.
Top

I got a set of hubs out of the USA it was a bit of a fluke finding them on USMB, but I'm sure if you got on one of the american brat pages (facebook) eventually you would find a set someone wanted to part with for less than a kidney

Looks like I'm going with Performance wheels Superltes 15x6" since they can be drilled to any bolt pattern, and machined to P25 offset which I will have to live with. Have sent a few emails out looking for somewhere that has them in stock, if not Performance has some more coming 6-8 weeks away

Not all is lost, chin up, get that order in! They might even come sooner than later.

Too close for my liking Bennie

Also have to order tyres and wait for them to come in...
Todays update is, looks like I found somewhere that has them in stock, new ETA - 2-3 weeks. That's more like it!!! Watch this space....I'll be so glad when this wheel debacle is over....
Top

Found an old photo today in the "archives"

Scanned it in to post a "Then and now" kind of photo.
The beloved family wagon in its previous form, in its native habitat, most likely on the Yorke peninsula some time between 1985 and 1990 (before I was born

)
Compare it to its current form, and I'm looking forward to re-creating this photo in the new improved version. I just wish Dad hadn't sold that roof rack, it was from ARB and cost as much as a new trailer back then! I'll be looking forever to find something similar now. 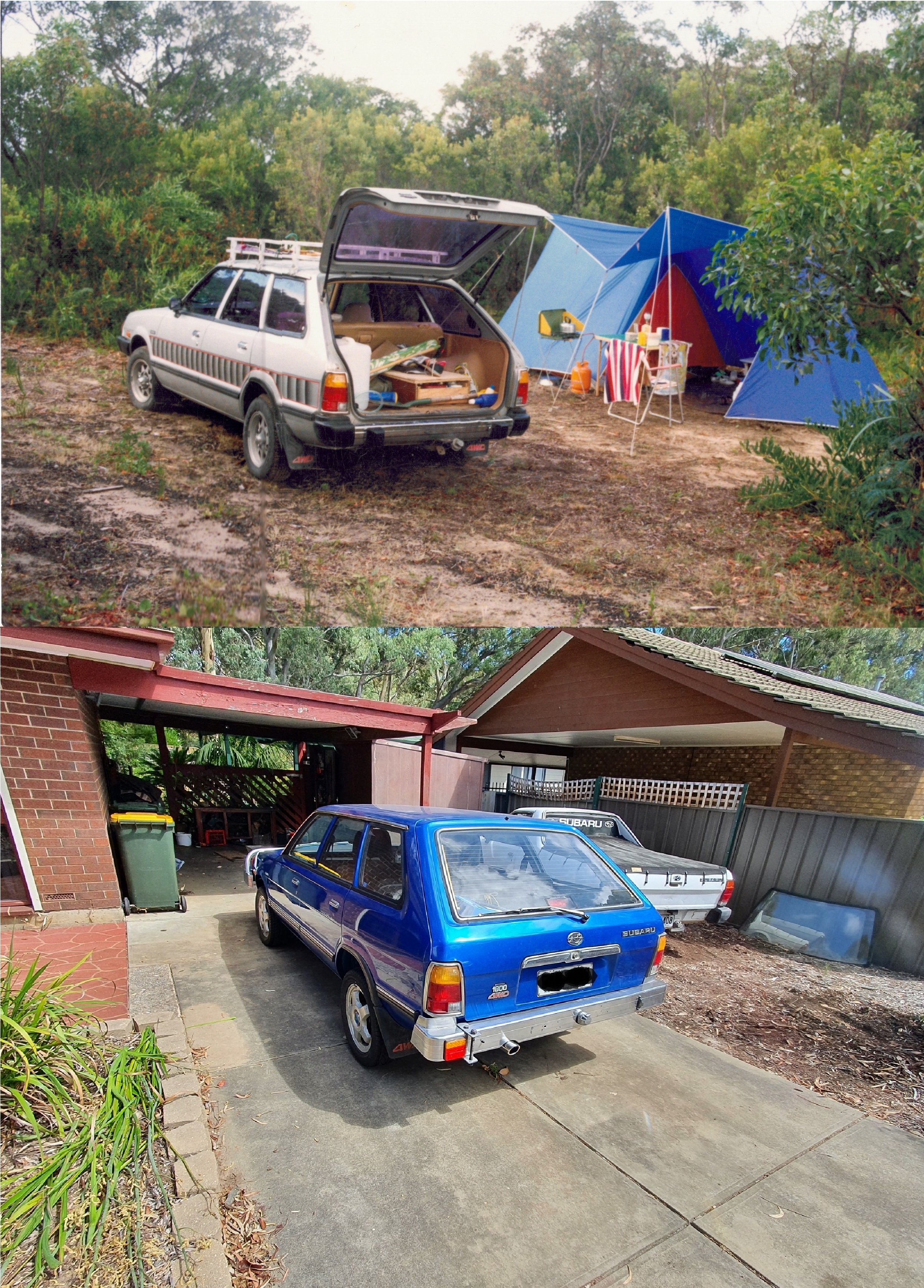