I was helping a mate attempt to put a lift kit in his brumby, then we would do mine next if his went all good.

The torsion bar mounting bolts were seized and I couldn't find anyway to see the encapsulated nuts by removing the panel in the tub. I was hoping it was a steel block with thread and we could bore a new hole and use a larger bolt but from reading various discussions online it might be an encapsulated nut. I have a feeling he has wrecked that nut if that is the case as he attempted to use an easy out that still would get the remainder of the bolt out.

Does anyone have any info on our best course of action to install a new nut and bolt? Is welding the mount to the body a bad idea as a last resort?
Top

The body mounts are primarily all captive nuts inside the enclosed chassis rails/frames. These are round bits of steel with a threaded hole, not the typical hex nuts we think of when hearing “captive nut”

Best bet is to either cut a hole beside the nut to pull the old bit out and put a new nut in there, weld it in with the bolt in place so it’s lined up properly, make sure the bolt still moves freely! Spray it up to avoid rust issues. Then weld up the hole you made to get into it - and treat for rust. The inner side of this weld can be roughly sprayed on through the captive nut, not ideal but better than nothing.

This is on my L series where I had a captive nut hold onto the bolt, sheering it from its welds. You can see the flap I created to access the captive nut internally: 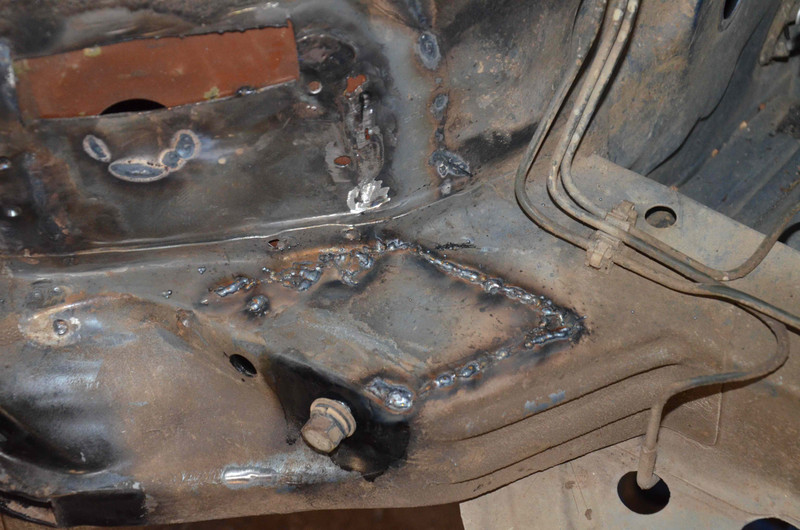 It’s not fun but is the best way to do it. And if done properly you wouldn’t know anything was touched.

Cheers for the reply.

Yeah looks like we will be cutting into the boddy to fix it. Give me a good opportunity to see what exactly is going on with these captive nuts and hopefully I can drill some small holes and wd 40 up in there when I attempt to do my brumby.
Top

I should’ve mentioned other methods as this isn’t the only way:

- use some flat bar to weld a nut to while on the bench (drill a hole first!). Have 40mm or so of bar on either side of the nut.

- access the captive nut area from above or side on, enough to slide this bar in with the new captive nut on it.

- either bolt in place or weld over the hole and onto the flat bar. If bolting in place you might opt to add two smaller captive nuts in the correct location. I’d only do it this way if you can easily access the captive nut without cutting again.

- use some anti seize on the threads of the bolt!

Many ways to do it, get creative

If you've got a steady hand, you can drill the centre of the bolt out (before you snap the head off!) and that can 'relieve' the pressure enough to get the bolt out sometimes.

I've had to use a local 'fastener specialist' a couple of times to do this on Honda crankshaft bolts: The engines rotate anti-clock wise, which self tightens the crank bolt, so when you need to replace the timing belt.... can't get the crank pulley off.

Other options are heat the bolt (again before you break the head off) or even welding a big nut on the bolt can get enough heat in there to free things up.

That doesn't help with service or repairs though!
Top
Post Reply
5 posts • Page 1 of 1