Biggest battery in a Brumby

Biggest battery in a Brumby

Hey all, long time no see

Oh how time flies, I left my job of 5 years last Wednesday and feels like I haven't done anything Subie related in those 5 years. I've got the itch to go camping and bought one of those Jaycar special camping fridges, $199 with 3 years warranty was too tempting to walk away from

I've decided to go in the rattly old Brumby, because reasons. I was wondering how I could run the fridge as cheaply as possible, thinking of dual battery setups and what not but that required space and big wiring, and lots of $$$.

Solution? wait for boxing day sales and snag on special, a dual purpose/deep discharge lead acid and see if it would fit in the original location. It does! Just, needed some light massaging. The idea is that this will be able to run the fridge for 2 days and still be able to start the car. The alternator (soon to be upgraded) will then charge the battery as normal while driving. No expensive dual battery system, no expensive and fragile AGM taking up space in the cab or spare wheel area. Just need to run a dedicated wiring line from the aux. studs to wherever the fridge is. I will also take a tiny lithium jumper pack with me just in case.

Now let's see if this photo will work.

Photo works mate and that is a tight fit!

Will you be doing the EJ alternator mod or do you have something else in mind?

Enjoy the camping, it’s a great way to recharge and reassess your priorities

I was surprised the RHS wasn't sitting lower after this

I've ordered a Nissan Maxima alternator, 110A jobbie which is almost a bolt on swap. Might need to upgrade the charging cable to the battery/fuse link area, and might as well replace the fusible links box with something more modern while I'm at it. Charging this new battery at full whack with the new alt, is it possible to see 100A flowing? if the battery was nearly run down for example. Might need to invest in a clamp meter to check on electron flow rates

Not really battery related but this week I've still been adding upgrades to the old warhorse for the camping trip. All lighting related:

Replaced the sealed beams with H4 units, halogen globes.
Did the headlight relay upgrade as per OffroadingSubarus website, good info!
Added the flood light relay on the high beam circuit, illuminated switch in the dash and a couple of $40 floods from Jaycar, surprisingly effective actually!

Oh and put a wire through into the cab to run a couple of "always on" accessory sockets for the fridge. Also plan to plug a flexible/folding solar panel into the spare socket to charge the battery during daylight hours.
I've got the fridge running in there now, to see how the battery handles it over night and if the car will start tomorrow.

Are those LEDs flood or spot lights? I like looking down the road at night with some spill to the sides and tend to find the LEDs just don’t do it plus I personally don’t like the cool white (bluish) light they give out.

I reckon you’ll find the battery will be good for two days, maybe three. Good to test it though.

When are you leaving for your trip?

El_Freddo wrote: ↑
Thu Dec 31, 2020 10:01 pm
Are those LEDs flood or spot lights? I like looking down the road at night with some spill to the sides and tend to find the LEDs just don’t do it plus I personally don’t like the cool white (bluish) light they give out.

They're floods, wide diffused beam. Haven't tried them while driving at night yet but dry run in the driveway and they swamp out the new H4 halogens high beam. They are pure white as you say, makes the halogens look piss yellow

We'll see how they go in real world use.

The trip will be as soon as I can, mid January probably. Right now I'm waiting for parts in the mail, wheel bearings and alternator.
Top

Well the middle of Jan has been and gone without the camping trip, because I've discovered that not all Maxima alternators are the same

I thought I was buying the same alternator that's in the blue wagon which was a really simple swap, pretty much just transfer the pulley over from the old alt and put a connector on the car wiring side. The one I got this time was different in 3 ways, can all be seen in the below photo. Been kicking some real goals when ordering car parts lately

- input shaft was shorter which needed a new custom pulley
- wiring connector was different, didn't use the 2 x 6.3mm spades that the other alt has so I had to solder wires on and pot the socket with goo
- mounting ear is in a different place! the alt in the wagon is 180 degrees directly opposite from the pivot, this one is about 120 degrees

It's in now though and working. I'm thinking forget the wheel bearings lets just go...except I missed the cool weather last week and now it's stinking hot!

And yes I plan to upgrade the puny charging wire to a proper thick cable, that's just jammed in there for testing temporarily. 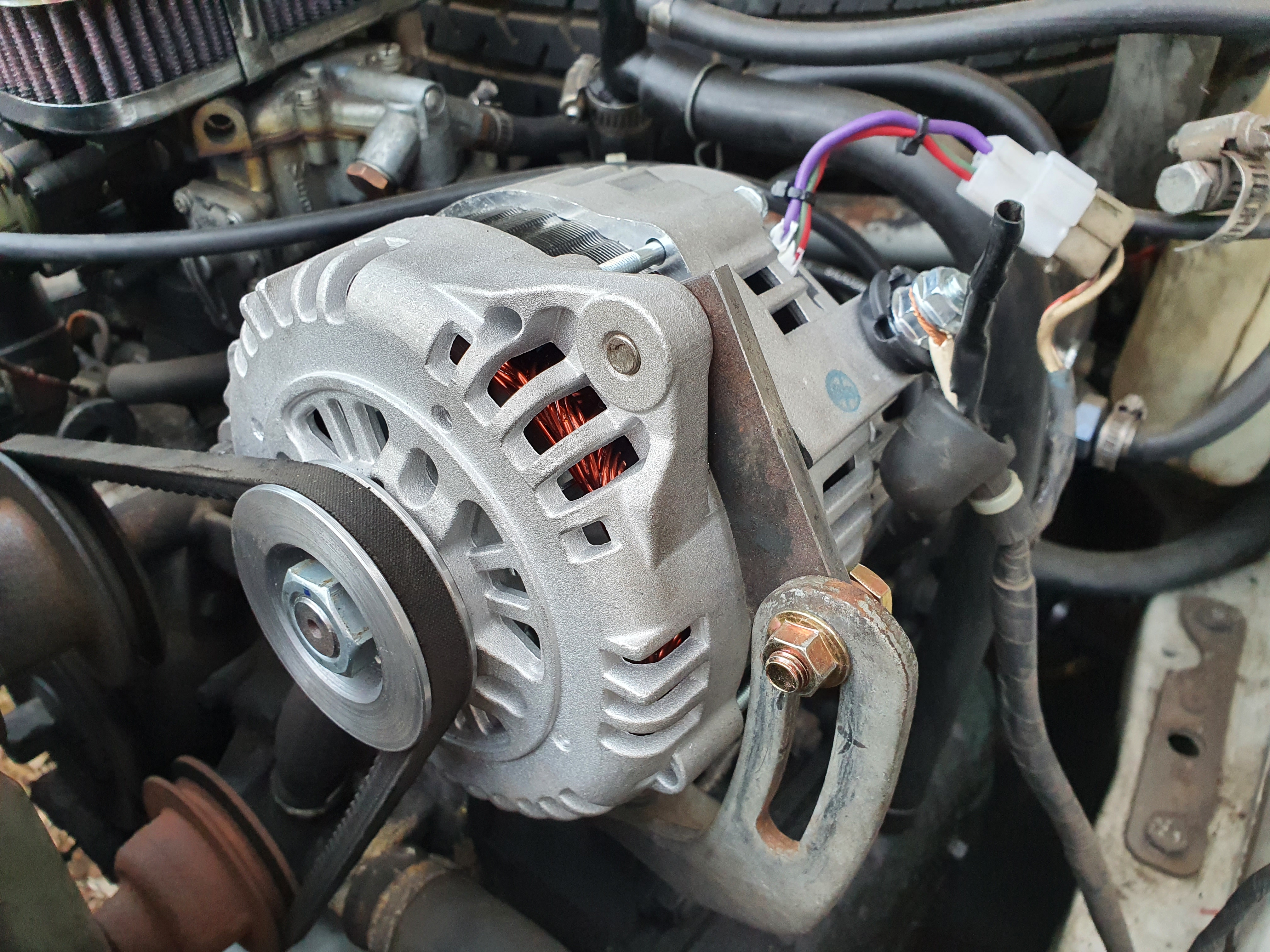 yes, but you did get 110amp and not 90amps from the hitachi style maxima alt - so not all bad

) - I used Clay Auto elec on Sth Road, who set up a full newer cable run for me, to my specified length , including 100amp fusible link and protective plastic tube for cable - for less than $65 - so very very happy.
Top
Post Reply
9 posts • Page 1 of 1

Return to “Electrical, Wiring and Lighting”