Also my rear tailgate has two rows of 5050 smd led's that are ultrabright, I disconnected my rear windscreen wiper power and hooked up a remote control on / off with dimmer to the LED strips, this makes it practical when fishing as I can control my light situation from the beach. 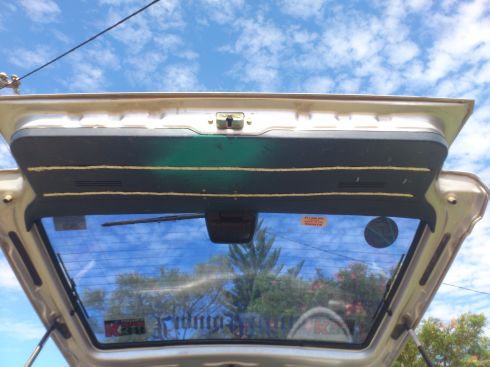 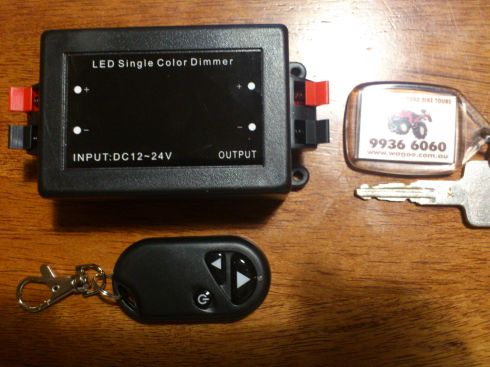 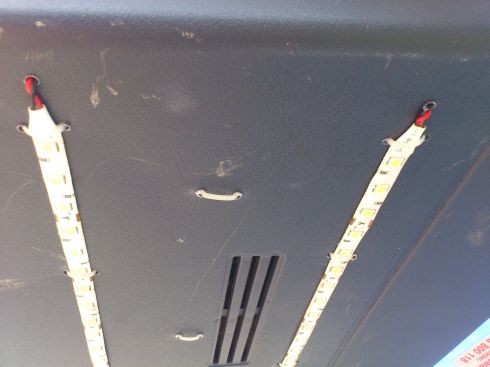 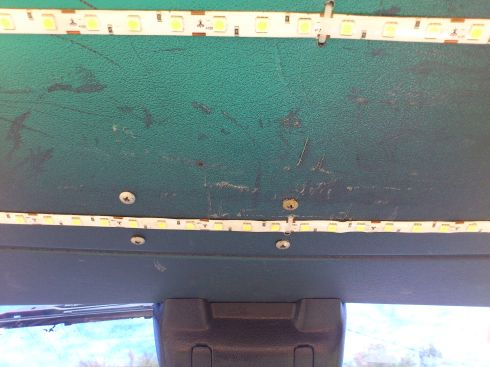 Kalbarri_baru wrote:Also my rear tailgate has two rows of 5050 smd led's that are ultrabright, I disconnected my rear windscreen wiper power and hooked up a remote control on / off with dimmer to the LED strips, this makes it practical when fishing as I can control my light situation from the beach.

I can vouch for Wayne's LEDs on his tailgate, they are bright as f**kin bright.

You know you are getting old when the candles on your birthday cake start to cost more than the cake itself.

Disclaimer: Not my website but hyperlink here to Subaru workshop manuals
Top

My T10 led wedges (Blue) arrived today I first placed them in the park light housing but they were too blue (looked ultra cool though) and then I placed them in my tailgate as number plate lights, again too blue, leaving them in would have had a flashing blue light behind me.

Looking at a light purple for the front parkers and 5050 smd white for the plate number.

Will place some pics of the blue on front and rear, BTW the blue T10 wedges are free to a good home. 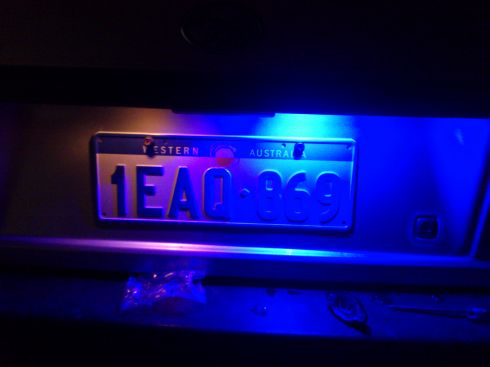 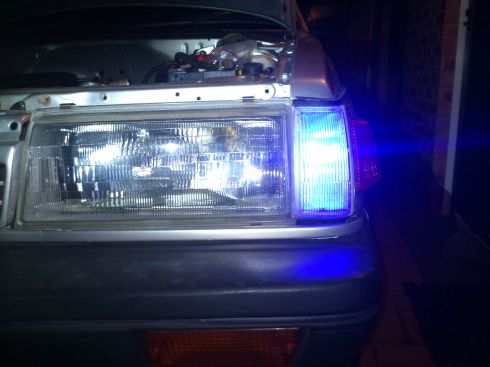 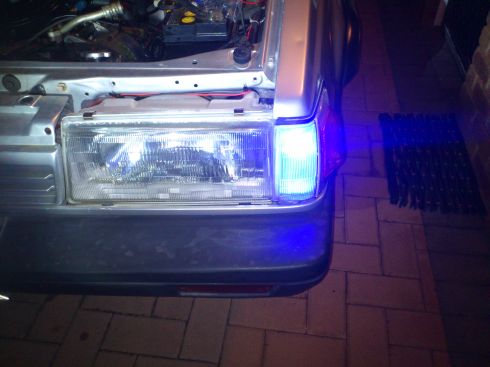 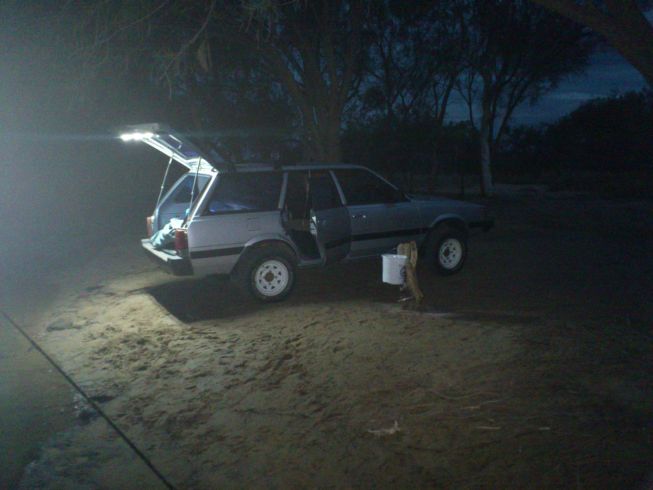 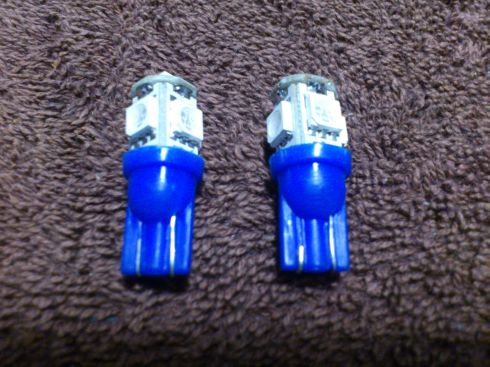 Just fitted the new (White) 5050 smd T10 wedges to the parkers and they seem ok, they have a purple tinge to them but that is what I was looking for anyway.

Will take some photos tonight of the front parkers, BTW I have just bought another 4 White 5050 smd wedges for $3.60 which comes with free postage from an Aussie seller, getting the bling without the ca ching.

often the cheap LEDs die quickly, not the LED itself but the internals of the holder.

you cant just plug in LEDs as indicator replacements. Youll have to wire in some resistors to stop the blinker flashing too fast.

If youre after white light id just got for a regular halogen type globe which is labelled as white. Often the globe itself is blue, but the light it puts out is very white. Narva do some good examples of this and im currently running them in my parkers in my VW.

Alex,
The alternative to the fast blinking is error free CANBUS LED.

yes i had to get these from my number plate illuminators for the VW, or else it just kept telling me that the globes were blown when they were working. Must pick up a lessened resistance.

Been meaning to add the wiring diagram for this ... 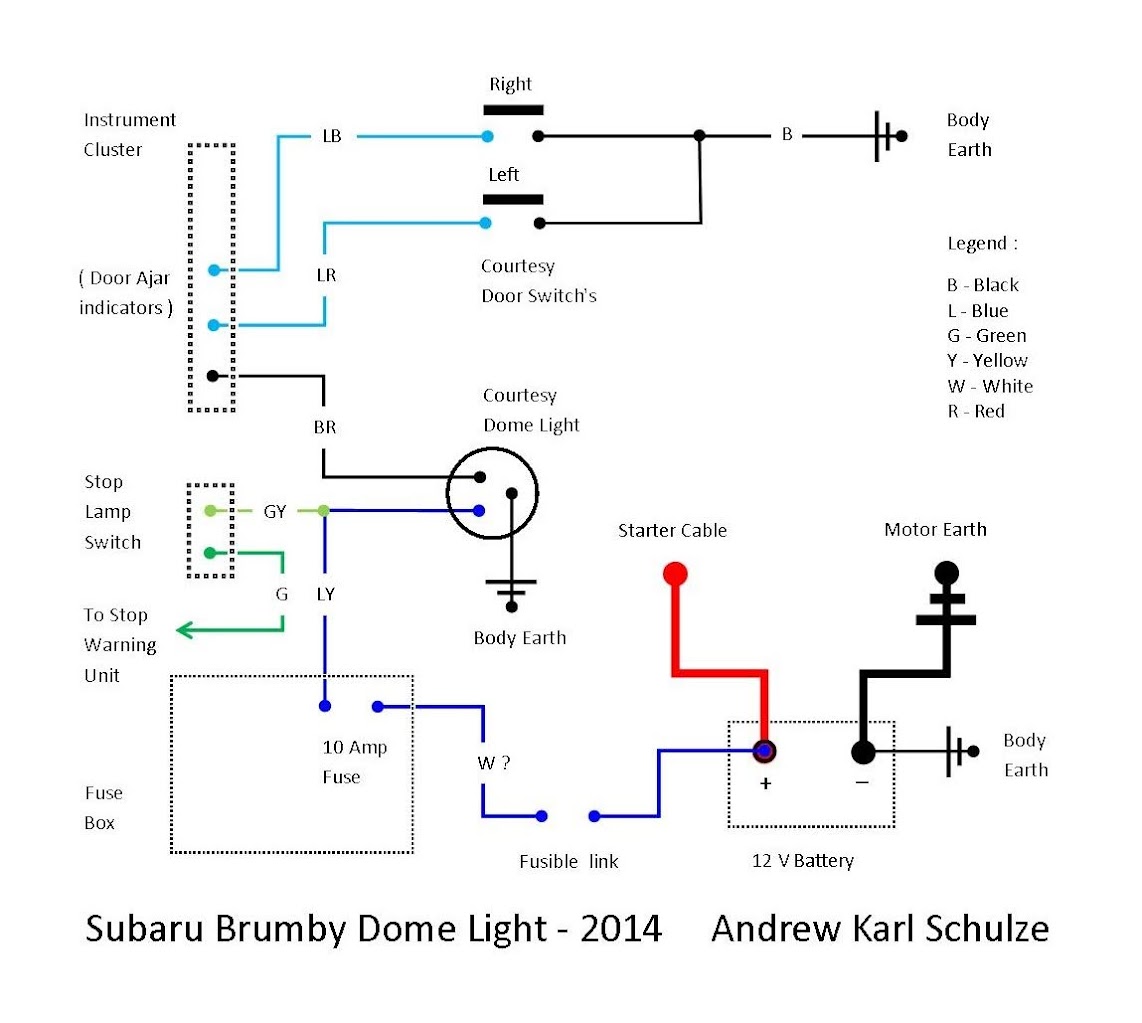 Note : I've added an earth to the Dome light - not shown on previous image ...

The above diagram is for the existing condition - Do note the following : Will add the proposed 'Puddle light' door circuit later, although may have to run them off a relay, so as not to draw to much current from existing circuit ...

Add : I got the basic wiring diagram info from here : http://webmonkees.com/art/sub/85bratwires.jpg

Working to make this a 'wiki' page also ... If I've forgotten something or it doesn't look right, let me know ...

Canbus BAY15D 21/5W LED indicator/brake globes. Best thing is its not from HK or China

Just found the thread. Couple of years late, as usual!

The link below I posted elsewhere and may be of help to those with a SH Forester (mine's a diesel) and as an aside, a 2004 BK Mazda 3 SP23 which conveniently uses the same bulbs.

Seems to be no CANBUS interference with my Subaru.

Find the link here (2nd post if you just get to the thread) and if anyone has any ideas about spacers/reflectors to assist a couple of the bulb positions (tailgate area in particular), let me know.

To speed my installation and get a better idea of their effectiveness, I installed them at ~1am outside in winter in Canberra

The bulbs are expensive but worth it. They fit the plug receptacles to begin with and have the electronics built in. CANBUS-compatible ones are available. I've had them in both vehicles for about 8 months with no light decay, no unevenness, consistent colour, no failures (yet). No pics, due to a dodgy little auto-exposed-only camera. If it's any assistance, the first time my 2-y.o. (at the time) saw the interior light, she said "too bright!"

As far as I know, LEDs come in different quality batches (and certainly so does the electronics and workmanship). There's a reason you can get 10 of some for the price of one other.

Ok - here is the second part to the new wiring diagram for LED's in door : 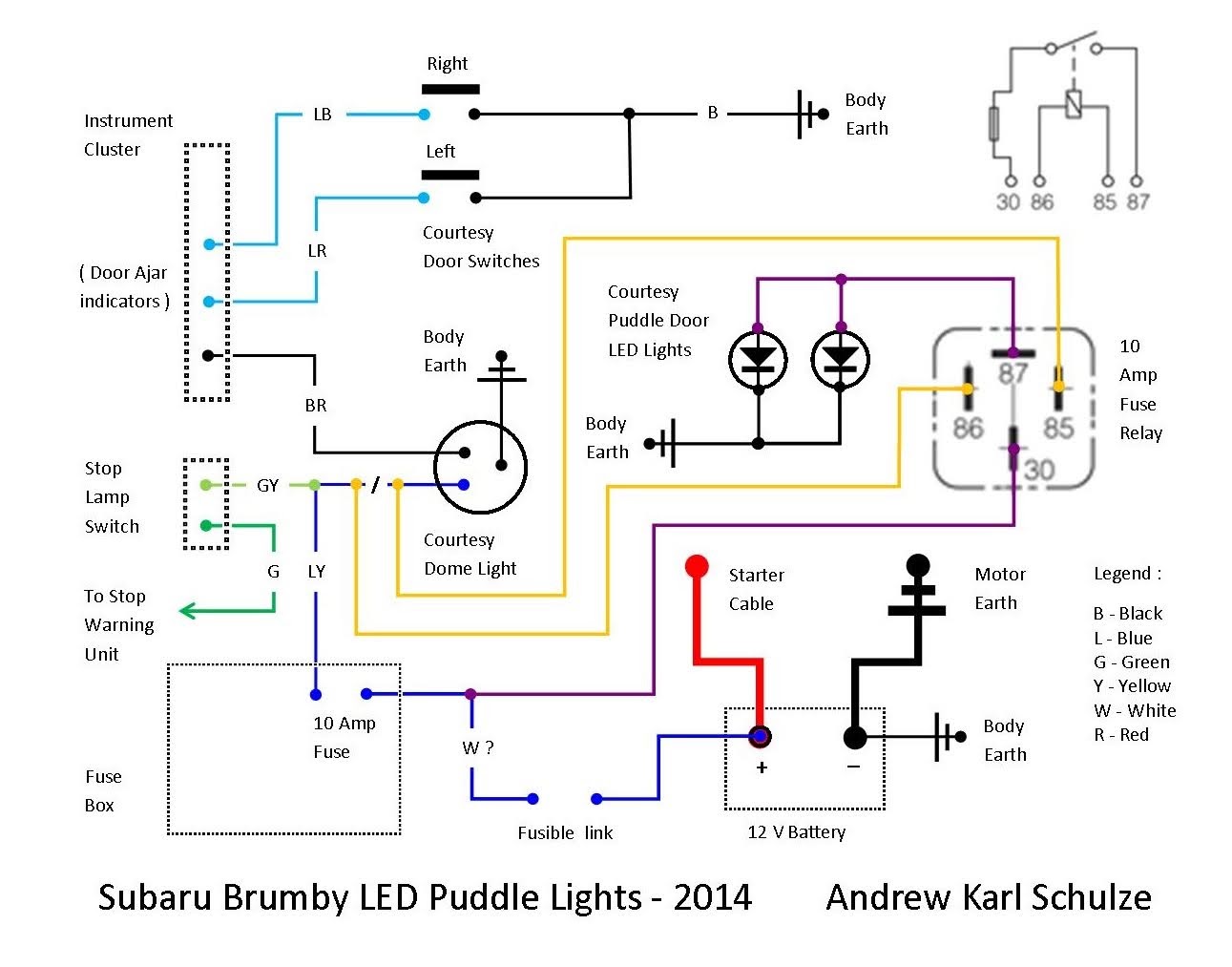 Ok - Finally got round to adding this as reference document : 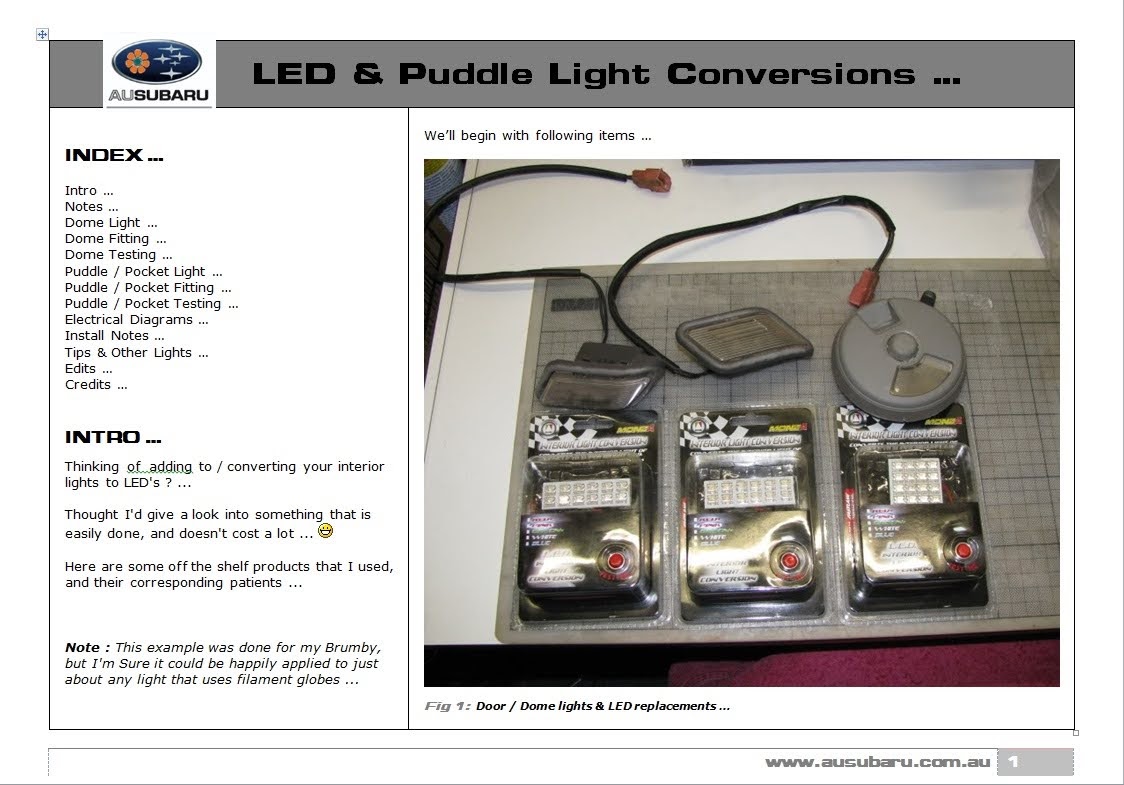 LED Conversions ...
Note : file has disappeared from system, will have to find somewhere to host it.

Small update with some new types of LED ... 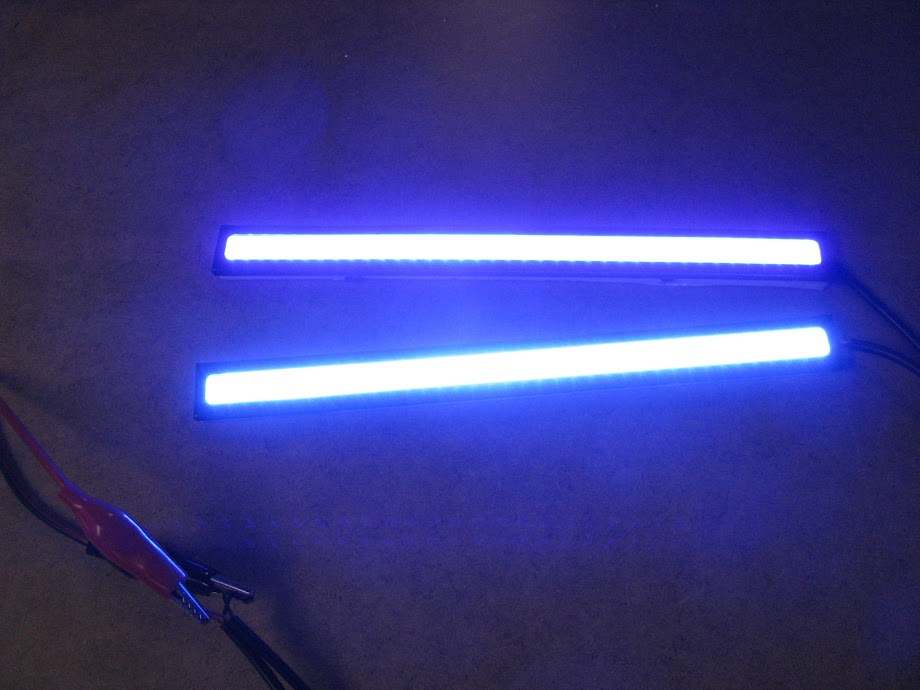 
Yes they are damn bright, can't look at them for to long ... 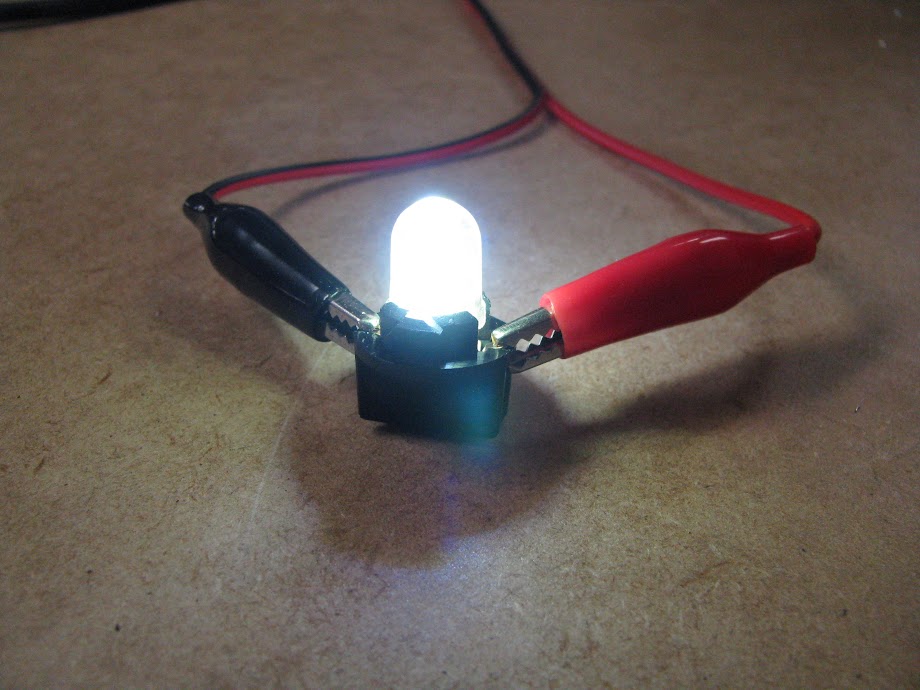 
Will have to experiment with them to see how they go ...

Probably not the exact right subforum to ask but I have to start somewhere; does anyone have any advice on replacing the trademark Impreza round driving lights with something better on my 2004 model? I could probably swap the bulbs for a superior led bulb but I’m also wondering if there’s a nice looking led driving light that would fit in there.. no doubt I’d need to throw a relay in because of subi’s choice of polarity etc. I’ve had the car about 13 years and never used the factory lights because they are very sad, one of the only things I don’t like about the car. Would appreciate any thoughts on this, thanks guys.
Top

I’ve not seen said spot/fog lights up close. What I reckon would be worth looking into is replacing the factory units with some aftermarket driving lights that fit in the bumper holes. Wire them in for high beam only use with an override switch in the cab to turn them off and you’re all good.

I haven’t seen anyone else do this, but that doesn’t mean someone hasn’t already done it. If you find a solution you’re happy with, please post up how you did it

LED's are good upgrades for SOME lights in the car, but not all! As I have found out this past week having gotten the blue bullet on the road. A tale of woe and a warning, don't replace your dash warning lights with LED! Your alternator will stop working!

But how? you may ask, well let me explain...

The problem with LEDs in this situation? It's obvious to me now but I had to think about it for a good few hours. I measured the voltage at my alternator connector at the lamp terminal with the key in "ON" position...7 volts!!!

Nowhere near enough for the alternator to start charging, and the warning lights all stayed on. The LED's were dropping the 12v down because they are diodes (known as forward voltage drop) to 7v in the instrument cluster. I had a T10 LED in the "Charge" light socket, this had 4 surface mount LEDs on it so 4x the voltage drop.
I took the LEDs out and put the original incandescent back in, alternator works fine again.

Before I figured this out I tried swapping the Lamp and Sense wires at the alt because I thought I had them the wrong way around. This resulted in the field windings being supplied current whenever the battery was connected (i.e, always) and when running the alternator took the 7v to mean flat battery so pumped out as much power as it possibly could, nearly 16v at the battery! This would boil the battery if run for long enough and meant the alternator got very hot during operation. And even was hot when the car was off because of the field windings being connected directly to the battery at all times, close to 4 amps I measured.
Top

Good tip on the charge light, would including a resistor ( of certain value ? ) to create correct load in circuit help ?
I'd note the some LED's already come with resistors in them, just got to work out if they are correct rating ...

Bantum wrote: ↑
Mon May 03, 2021 2:37 am
Good tip on the charge light, would including a resistor ( of certain value ? ) to create correct load in circuit help ?
I'd note the some LED's already come with resistors in them, just got to work out if they are correct rating ...


I think the answer to this is yes and no. The resistor would have to be in parallel with the LED and of a similar resistance to the original bulb filament, not sure if the LED would still light with 6 ohm resistor in parallel with it. Actually some slightly later model cars have a resistor across the incandescent bulb filament so that the alternator still works if the bulbs burn out.
The resistors included in automotive LED "bulbs" are usually in series with the LED so in this case you would still get the LED voltage drop and I think the alternator wouldn't work.
Top
Post Reply
58 posts

Return to “Electrical, Wiring and Lighting”