We met up at the start of O'Brian's Rd at about 8am:

We cruised in, dropped on to an offroad track, got out of the way of an arrogant single vehicle charging up the track then I backed Ruby Scoo into a tree and cracked the rear right tail light. Nothing too serious, just frustrated at myself.

We did a couple of good long climbs that were a good warm up, then hit a number of "commuter" tracks: Nachaluva: 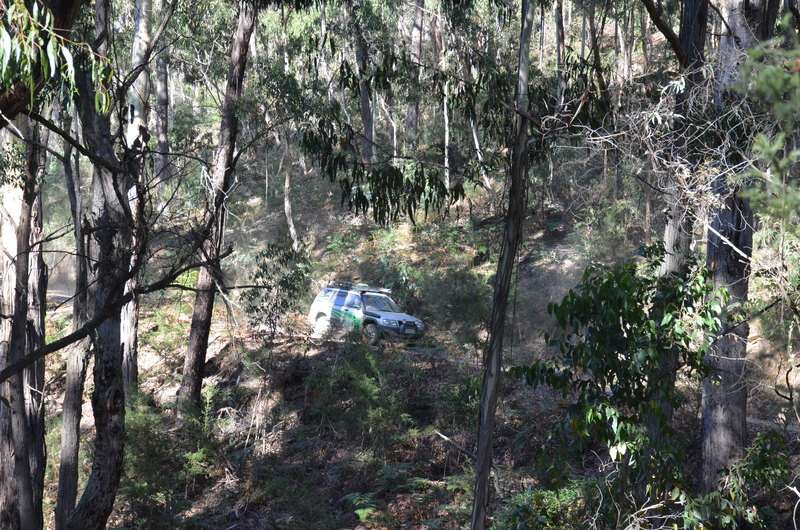 ...until we hit digger's track. There were a number of holes with water in them, one in particular that Nachaluva had a crack at - and only cracked his exhaust in the mid pipe in the damage department:

At another point on this track we dropped over this little rock step. It gave me a good opportunity to get some snaps of the foresters: 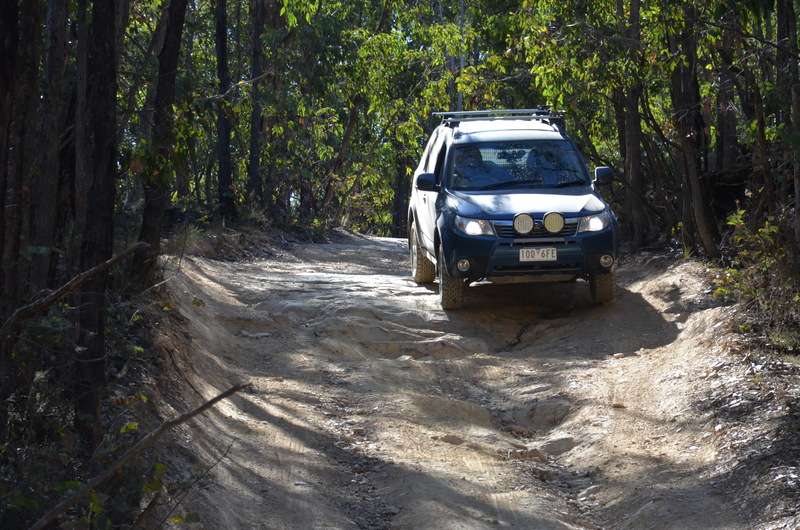 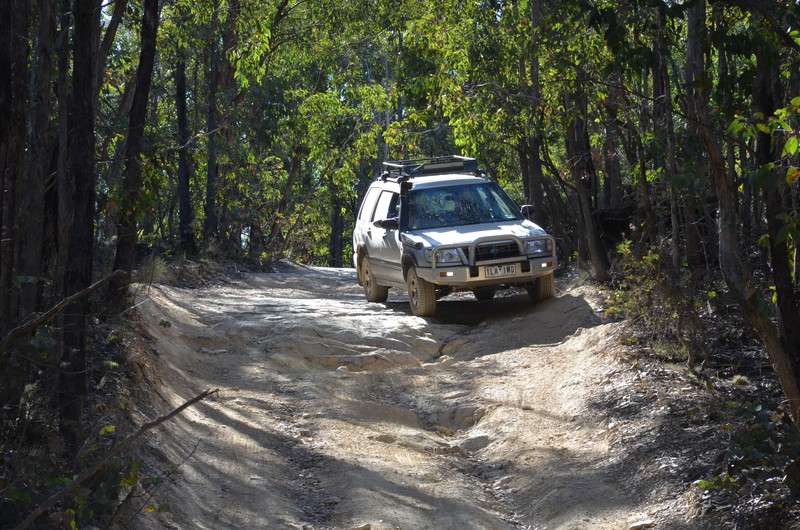 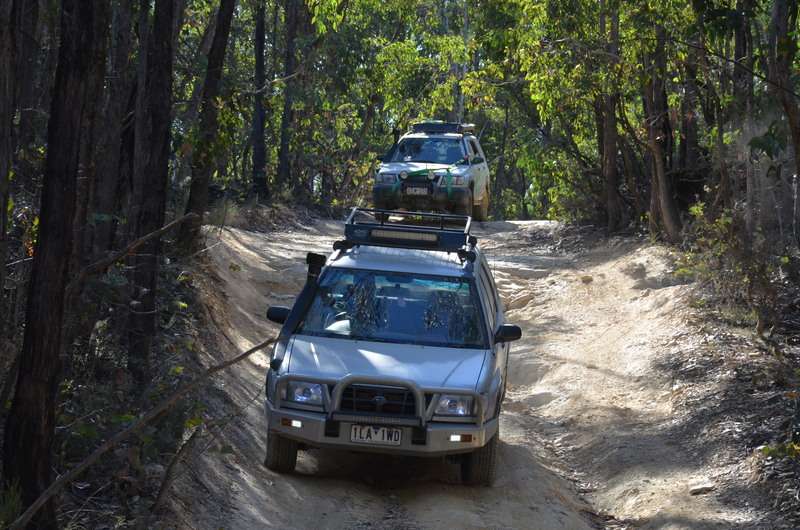 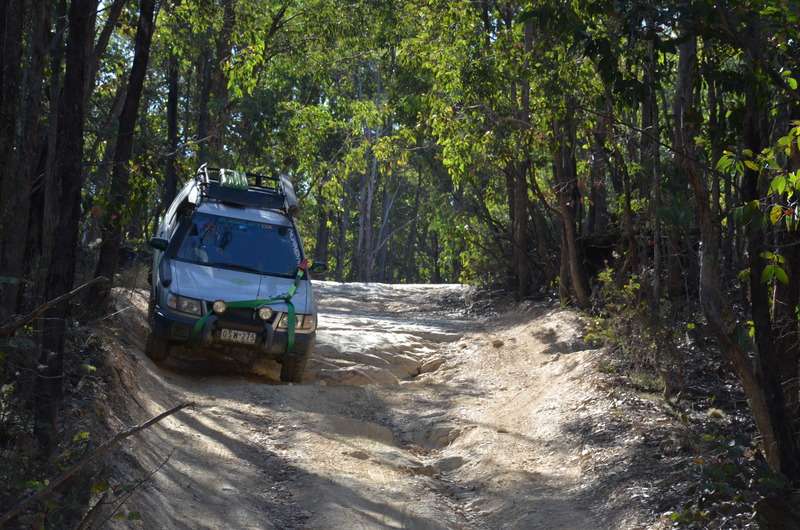 Just before we crossed the river/creek at the bottom of the valley, we turned around to do a rocky climb on the track we had just come down. It was interesting how different it felt on the way up compared to the bouncy feeling experienced on the way down.

We hit the main road again then shortly up the track veered off to the blue gum track link shortcut, where I snapped a pic of this sign, as it is one of the good ones: 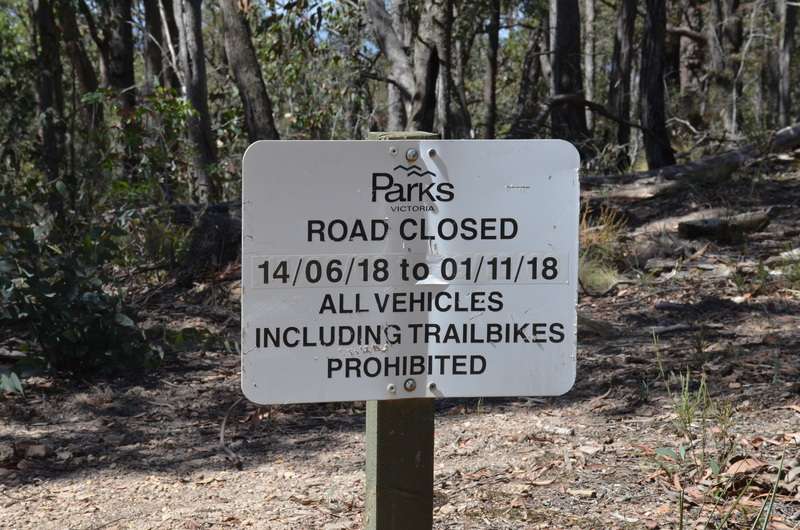 Then we had lunch on the shortcut track: 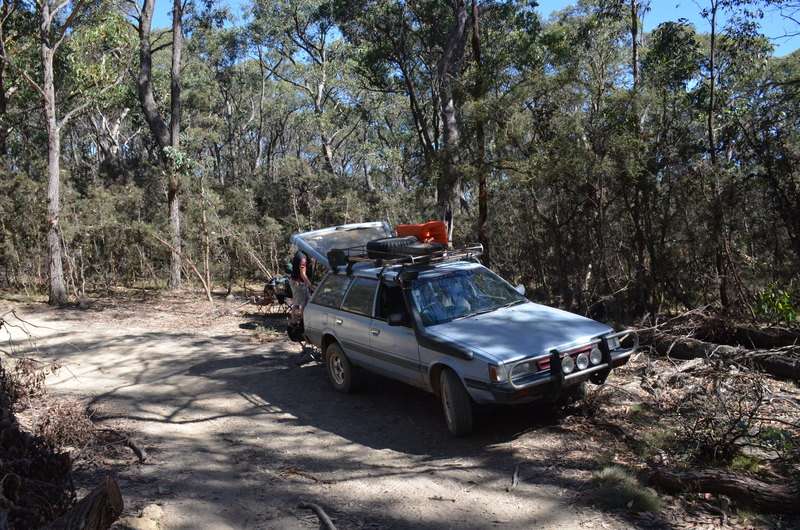 Then we were off to one of our old favourite set of tracks, or a track off ratcliffe to be precise - Number Two firebreak track. Near the start of the firebreak track: 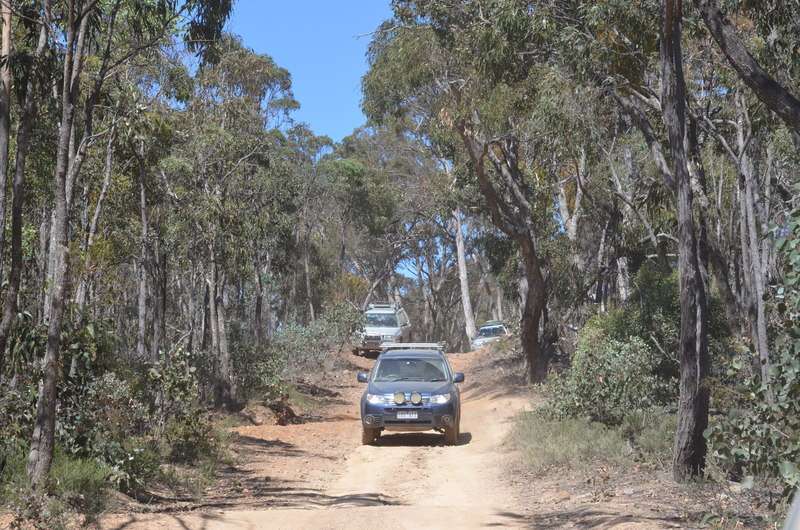 Properly dropping into the valley. Someone had carved up that track in the wet, leaving some deep ruts to negotiate on the way down, worst section is up around the corner the vehicles just came down: 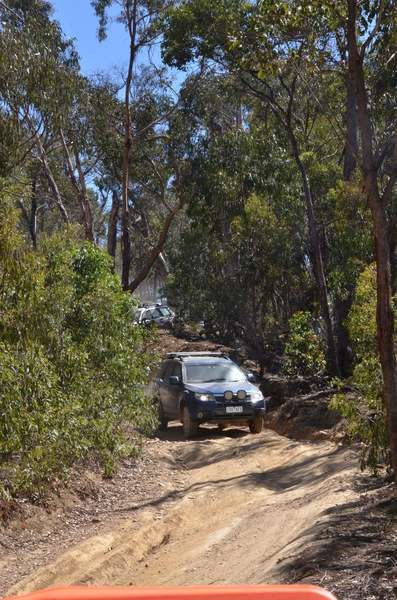 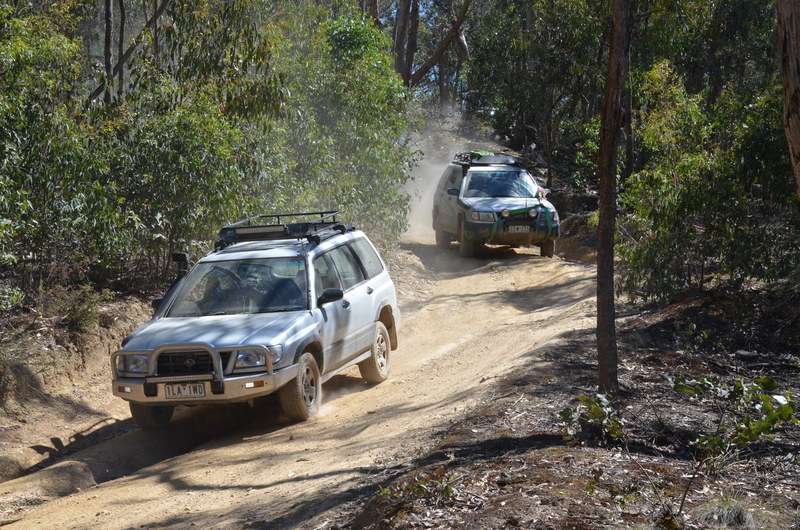 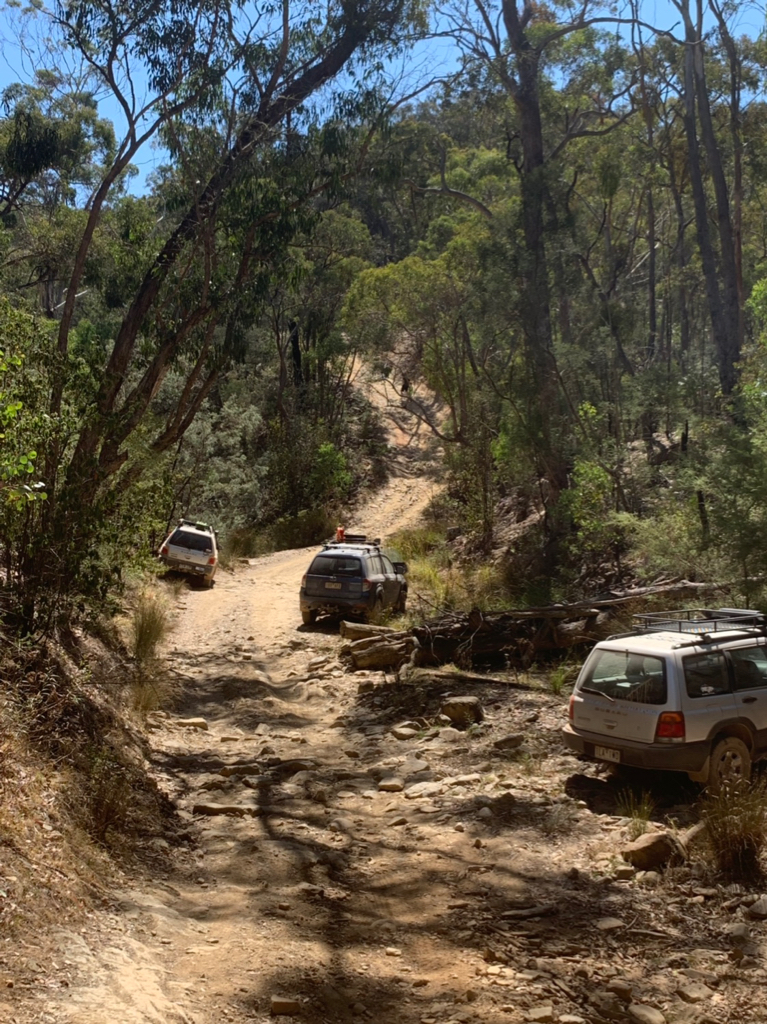 ^ Just after it disappears into the tree canopy, it does a slightly greater than 90* right hand turn, maintaining the same steep gradient you see here, and it has a rocky outcrop with some small steps in it for good measure

I went first in Ruby Scoo - I assumed that we were going up it without too much thought, even after walking the track. I was still on road pressures as I'm tired of spiking/cutting side walls on roadies. They went well and didn't wheel spin much which I was happy with. 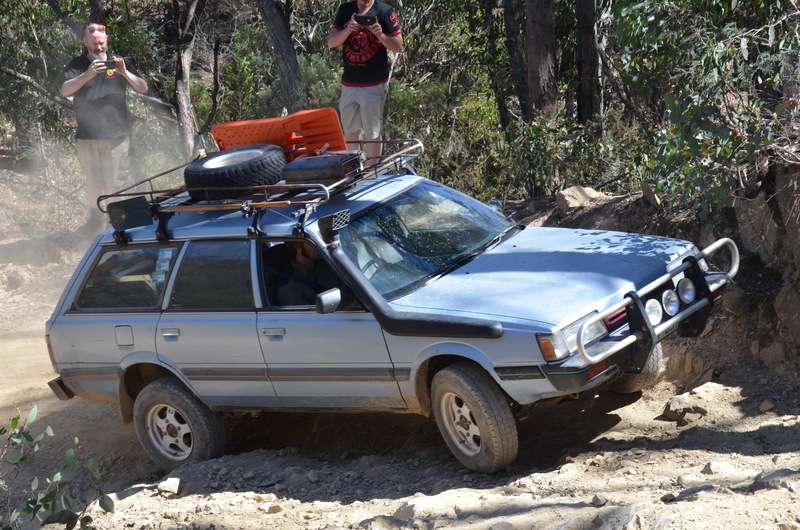 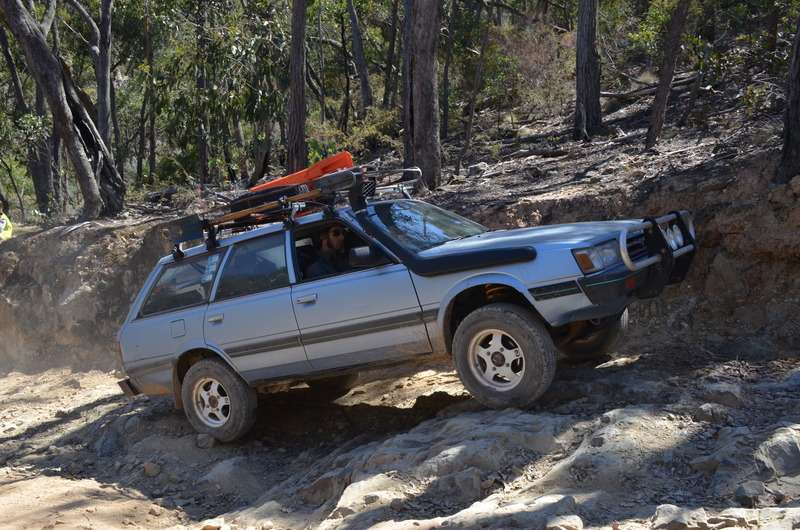 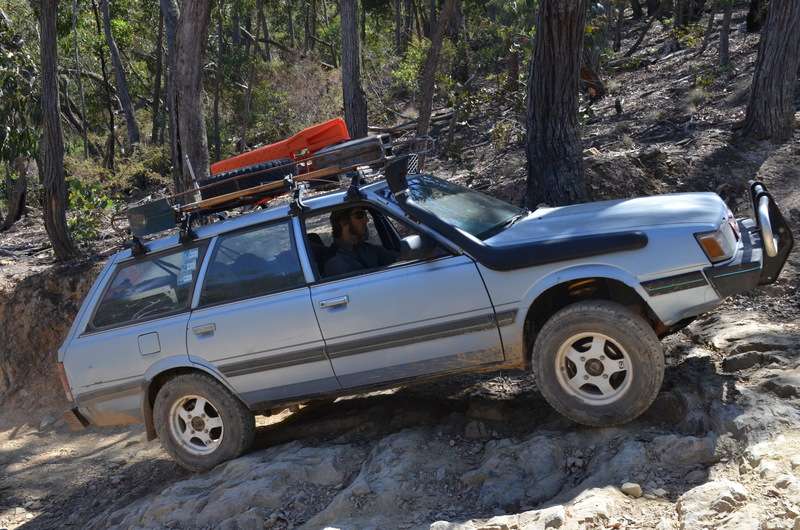 Those images are pretty rare to me - I'm usually driving and not taking pictures like these (Thanks "L series" Matt!).

And here's "L series" Matt in his SH - backing down to have another go at his approach to the corner: 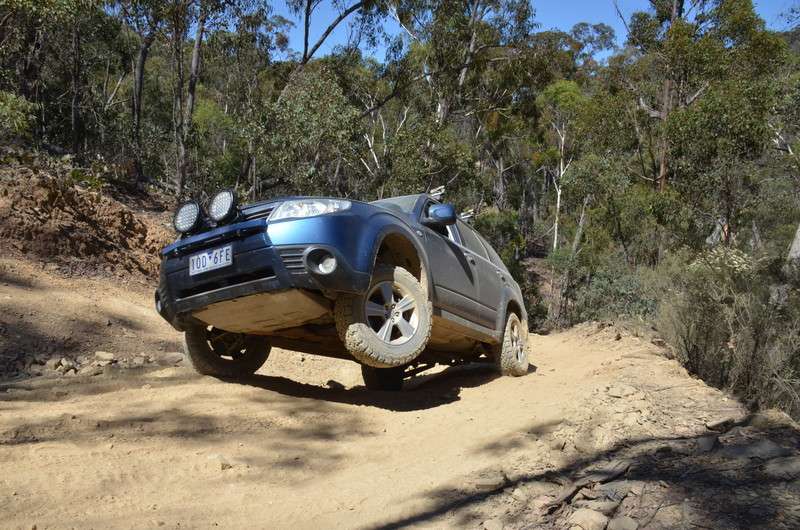 I don't have any further pics of this event due to videoing others doing the climb that still needs editing, but here's a few videos from 1WD_Foz:

Ruby Scoo towed/snatched Matt's SH up the track where his factory low range could do everything as it should. I don't have any pics of this, but it'll be in the video once I've got it sorted.

And this standing start off from the rock outcrop:
https://youtu.be/tvRTJJ3bQ0E

This was an awesome climb and definitely the highlight and most challenging stuff we did on the day.

From here we cruised around sort of aimlessly. I was navigator but didn't have a paper map with me so was relying on maps on an app with a phone that had patchy reception. And there was a no through road sign and the challenge was accepted. Which "allowed" us to end up on Lloyd track - a seasonally closed track with a track around the gate. This got us into an area that seemed to be comp truck spec in the mud. I rode the ruts, then was forced to drop into them, glad that they were smaller in this section as I made it through but I did damage the exhaust.

"L series" Matt followed and ended up like this: 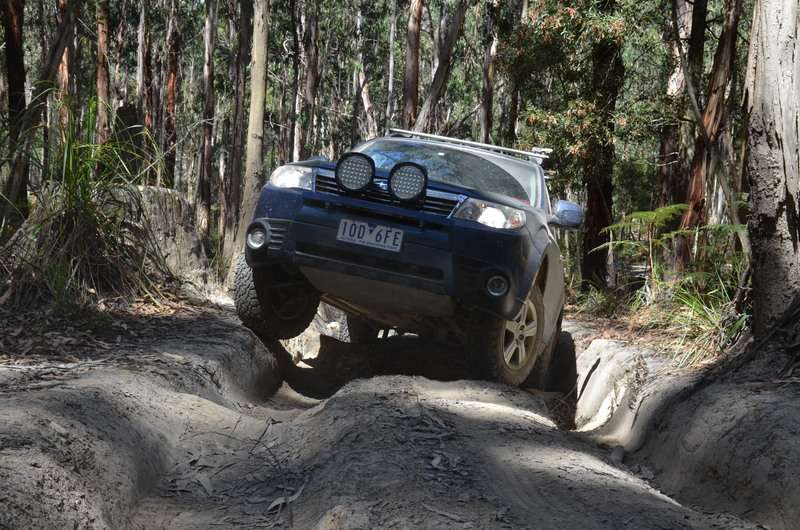 In the mean time the forester "twins" made their way around a large bog hole that allowed them to access a track that avoided the rubbish that I put Ruby Scoo through. 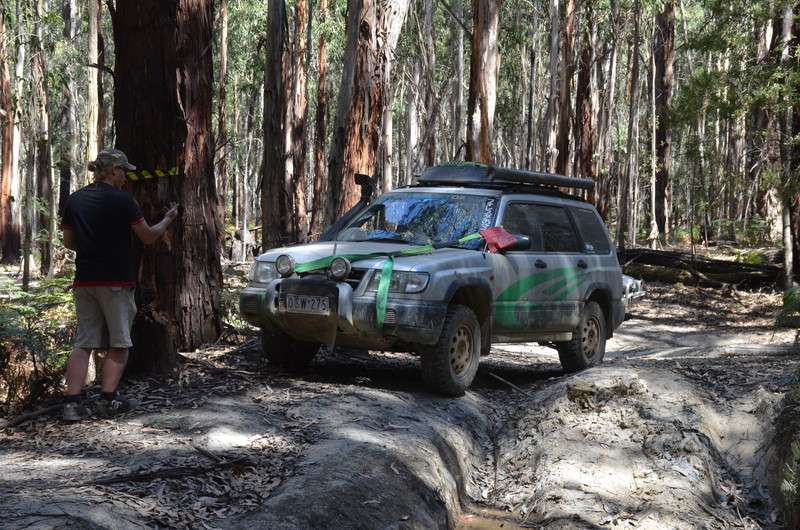 Then Matt's SH followed after getting out of the rut and managing to turn around: 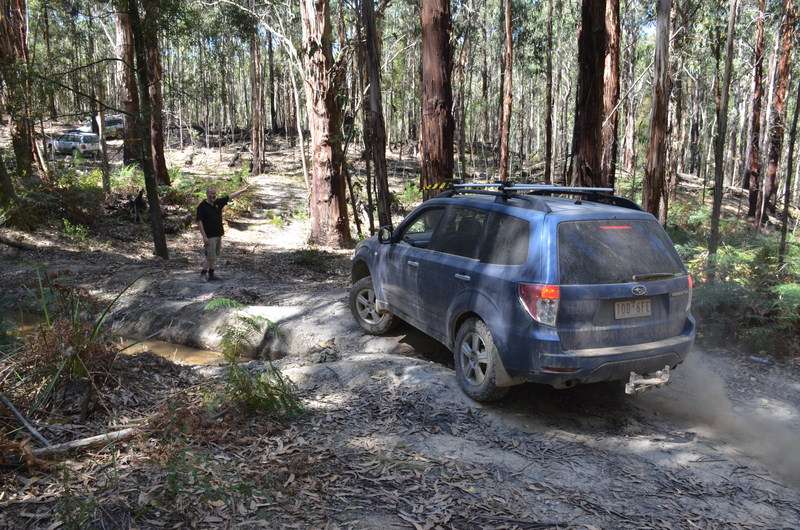 And the last image of the day: Nachaluva Matt cruising up the last of the rutted stuff for this section. 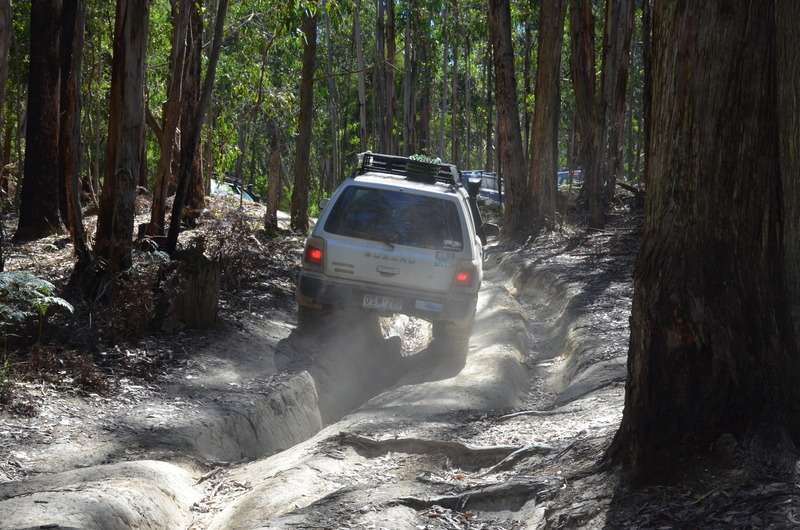 We ended up popping out just southish of Woodend. Airing up occurred, some reminiscing and stories were shared and we all left with a half smile - half not due to leaving the tracks, the other half for hitting the tracks!

A good day had. Thanks for those that made it. Condolences to Venom who planned/organised us all for the trip then fell ill the day before.

Oh, and "L series" Matt was dubbed this due to his SH being a kind of blue like my L series, even though it's way taller!

I hope you all enjoyed the read/pics.

Nice work, looked like a lot of fun.
The vid of Ruby scoo rolling up that rocky track like it was nothing, a thing of beauty

I must have slipped back to the SG term after a solid start in the vehicle description section...

Thanks Silverbullet - it certainly makes me want to get out there more often!